Swimming Australia is being accused of hypocrisy after an Olympic hopeful said she returned an abnormal drug test just days after teammate Mack Horton's high-profile protest against a Chinese rival suspected of a doping offence. 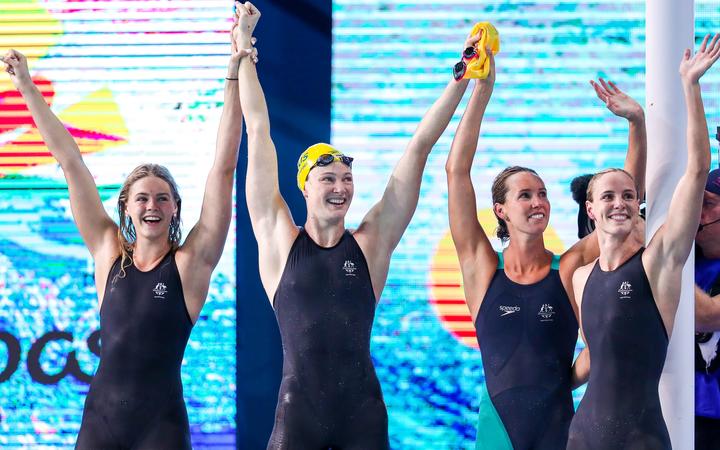 Shayna Jack (far left) was a member of the Australian women's 4 x 100m freestyle which won a gold medal at the Commowealth Games on the Gold Coast and broke the World Record. Photo: Photosport

Queensland swimmer Shayna Jack announced on Sunday that she had tested positive for anabolic agent Ligandrol - which is popular with bodybuilders - in late June and that a follow-up sample has confirmed the banned substance.

The 20-year-old's statement came after Horton decided not to share the podium with China's Sun Yang following the 400m freestyle final at the World Aquatics Championships in South Korea, having previously called him a "drug cheat".

The backlash to Horton's actions was fierce and spread quickly. China's state-run media accused Australia of being a "second-class citizen of the West" and of "white supremacy". Horton was decried as a "clown" and trolls left death threats for him online.

But Jack's admission has poured petrol on the tinderbox. She has been bombarded with taunts in both Chinese and English that have castigated Australia as a "nation of cheats". Some posts features emojis of pills.

"This country of Australia is as rubbish as your swimmers. You're doing drugs and losing face," wrote one commenter.

Jack has reportedly hunkered down at home in Brisbane with her family as she protests her innocence and vows to clear her name. She has insisted she had no idea how the banned substance got into her system, although it has been suggested she could have taken contaminated supplements.

"I haven't slept much, and I feel a sense of emptiness," Jack wrote in a lengthy essay online, in which she said she had to confront "the challenge of facing judgement from people who don't know me".

The four-time World Championship medallist has cultivated a pristine image through her Instagram account, which has now been blitzed by trolls.