The All Blacks are convinced their new twin playmaker approach can unlock the meanest defence, starting with a ferocious challenge from South Africa in Wellington. 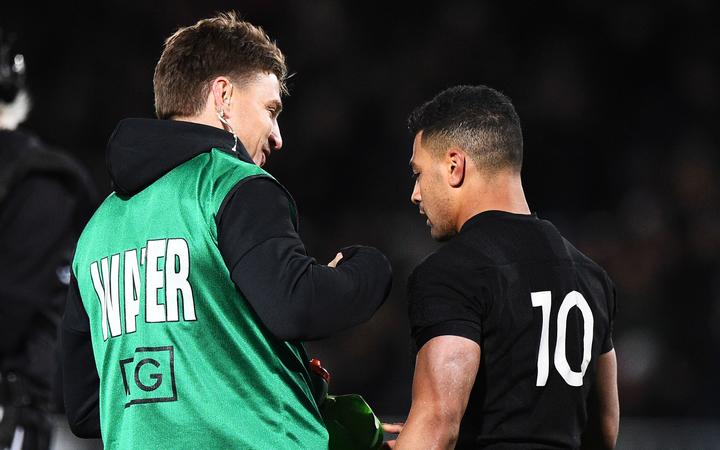 Much of the focus at Westpac Stadium on Saturday will be how the world champions function with Richie Mo'unga at five-eighth and Beauden Barrett in his new role at fullback.

A tactic clearly devised with the World Cup in mind has been introduced midway through the Rugby Championship, in a bid to add creativity to a New Zealand attack which has stuttered of late against the the rush defence employed by most Test nations.

Last week's 20-16 win over Argentina saw Steve Hansen's men go scoreless in the second half for the first time in his eight-year reign.

Hansen will also grimly recall last year's 36-34 to the Springboks in Wellington when his team had a mortgage on possession - forcing the visitors to make 235 tackles to 61 - yet couldn't finish their chances.

Hansen anticipates another "rusty" outing after making 12 changes from Buenos Aires but hopes his Crusaders-dominated pack can exert some control and that his 10-15 combination fires from the start.

Free-spirited Barrett can be a lethal weapon in a deep role, where he has previously dropped to late in games, according to recalled winger Rieko Ioane.

"It will be awesome. He brings a different aspect to the back three," Loane said.

"He's good at kicking but he's a huge threat on attack and giving him that huge open space to run off (the midfield), he will add a lot and it is exciting."

Hooker Codie Taylor said his Crusaders teammate Mo'unga fully deserved his first start in a big Test, with his composure and moments of brilliance having played a pivotal part in three successive Super Rugby titles.

"What he brings to the table is an unreal skillset and the ability to back himself in little moments and give it a crack," Taylor said.

"I think that confidence has got him to where he is and I'm looking forward to seeing it on Saturday."

One uncertainty is who claims the goalkicking.

The more experienced Barrett is playing at his Hurricanes home ground but an off-night from the tee gave the Boks a leg-up in last year's boilover.

Mo'unga landed all 17 of his shots during the Crusaders' three Super Rugby knockout wins but Hansen may not want to lump him with extra responsibilities.

Hansen will have his microscope on other positions as he fine-tunes his World Cup squad, with Sonny Bill Williams under extreme pressure following an injury ravaged season.

The veteran midfielder has been asked to simply come through unscathed in what will be his first Test in Wellington since copping a red card in the second Test loss to the 2017 British and Irish Lions.

"We want to see him stay on the park... we know he can play rugby to a high level," Hansen said.