From the 1976 Tour of South Africa to last year's epic contest in Wellington, RNZ looks back at the most memorable moments between the All Blacks and Springboks. 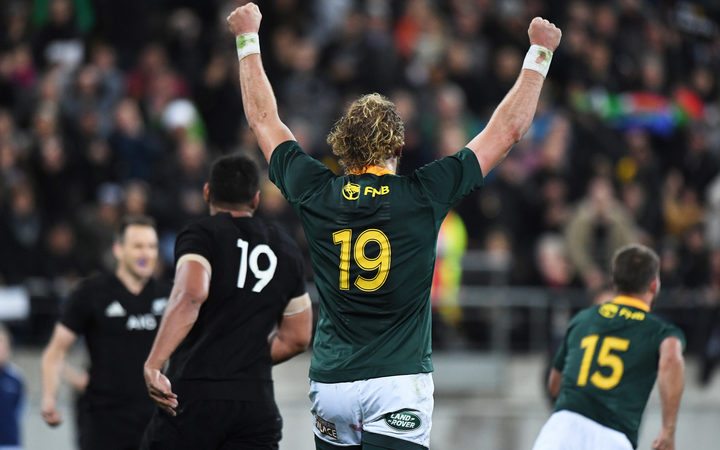 This series was memorable for a number of reasons.

One it included five Māori members of the All Blacks tour squad as well as Samoan-New Zealander Sir Bryan Williams.

Those six players were given honorary 'white status' for the tour, as they did in 1970, as South Africa, was still in its apartheid era, leading to protests both in New Zealand and throughout the world.

Due to the decision to play in South Africa during the apartheid era, 25 African nations (29 countries in total world-wide) boycotted the 1976 Montreal Olympics in protest of New Zealand's participation at the games.

At the time the United Nations had called for a sporting embargo against South Africa due to its apartheid regime.

As for the series itself, New Zealand played 22 matches in total, winning 18 and losing six.

The matches weren't without controversy either, speaking to the Herald last year, All Blacks prop Billy Bush said he wasn't awarded a try by the ref in the final Test match because he was Māori.

New Zealand lost the Test 15-14 and the four-match Test series against South Africa three-one as a result.

Much like the 1976 tour, South Africa's tour of New Zealand was incredibly polarising.

New Zealand's love of rugby and opinion on politics divided families and caused mass protests throughout the country.

Despite Prime Minister Robert Muldoon giving the tour the go ahead, it didn't stop the matches from being affected.

The Test in Hamilton had to be cancelled while protests were held in Wellington and Christchurch on the respective game days.

However, the most memorable moment on the field came in the final match when two men flew a plane over Eden Park, dropping 'flour bombs' onto the pitch, striking All Black prop Gary Knight.

Despite the incident, the referees allowed the match to continue with New Zealand winning the Test in injury time 25-22.

Entering the final, both New Zealand and South Africa had gone through the tournament unbeaten.

Despite the match being in South Africa, New Zealand went into the match as favourites following the side's demolition of England which included a four-try spree by the late Jonah Lomu.

The tournament itself was also incredibly influential for South Africa's public relations to the world in a post-apartheid era with Nelson Mandela at the helm.

Despite New Zealand's try-scoring ability throughout the tournament, the match was tryless with only Andrew Mehrtens and Joel Stransky kicking each teams' points.

On top of that, the match was the first in World Cup final history to go to extra time, with Stranksy famously kicking the drop goal to hand South Africa its first World Cup victory and hand New Zealand its first loss in a World Cup final.

The match was marred by controversy here in New Zealand with claims of the All Blacks being poisoned before the match.

Regardless of the claims, the way the South African backline, the late halfback Joost van der Westhuizen in particular, shut down Lomu was nothing short of extraordinary given the All Black wing's abilities at the time.

For many South Africans, the most memorable moment of that day will always be Nelson Mandela, donning the Springboks number six jersey, handing over the Webb Ellis Trophy to South African captain Francois Pienaar.

1996 was a momentous year in rugby for a myriad of reasons.

The sport had officially become professional, just a year after the aforementioned final in the Rainbow nation.

At the time the All Blacks possessed one of the best backlines of any era, with the likes of Christian Cullen, Jonah Lomu, Jeff Wilson, Frank Bunce, Glen Osborne, Eric Rush, Andrew Mehrtens, Alama Ieremia, Scott McLeod, Carlos Spencer and Tabai Matson.

Coming into the tour, the All Blacks had already won the Tri Nations tournament for the year, but that elusive South African Tour victory still haunted them.

The first match in Durban was like any other All Blacks-Springboks Test match; physical and close.

New Zealand won the match 23-19, outscoring the South Africans three tries to one.

The second Test, much like the first, was another tight encounter. With just a minute left on the clock, a four point lead and victory just moments away, the All Blacks won a scrum on the left hand side of the South African 22.

After winning the scrum and playing out a couple of phases, halfback Justin Marshall threw the ball back to Zinzan Brooke who, like in the 1995 World Cup against England, slotted a drop goal from 30 metres out to secure the win 33-26 as well as New Zealand's first series victory over the Springboks in South Africa.

South Africa won the final Test 33-22 but the celebrations had already begun for New Zealand, who finally achieved what had eluded them for decades.

The unveiling of Kapa o Pango

For years rugby fans had become accustomed with the All Blacks' traditional haka, Ka Mate, but in September 2005 Kapa o Pango was unveiled for the first time against the Springboks in Dunedin - led by captain Tana Umaga.

Commentator Grant Nisbett forewarned those watching to "keep an eye on this" knowing that we were all about to witness something new and exciting. He wasn't wrong.

That performance is perhaps the most memorable of any haka the All Blacks have done - particularly for the ending in which the team simultaneously performs the throat slitting action which drew the ire of opposing fans.

During the first broadcast of it, a 22-year-old Bryan Habana can be seen reacting with a look of disbelief to his teammates at what he had just witnessed.

Leading into the sixth and final week of the 2014 Rugby Championship, the All Blacks had already secured the tournament, however the Freedom Cup, played between New Zealand and South Africa, was still up for grabs.

The All Blacks had already beaten South Africa 14-10 two weeks prior, as well as a convincing 34-14 win over Argentina in between.

For South Africa, a win would've given them a chance at claiming both the Rugby Championship and Freedom Cup.

Like many matches between the two sides over the years, it was incredibly close with both teams scoring three tries each and penalties once again playing a part.

With just two minutes left on the clock, New Zealand up 25-24 and just after South Africa lost possession inside the All Blacks' half, referee Wayne Barnes went back to check on a tackle back when the Sprinboks were in their own half.

Replays showed replacement flanker Liam Messam hit Schalk Burger with a no arms tackle to the head and South Africa was awarded a penalty.

Springboks first five Pat Lambie, from 55 metres out, managed to kick the winning penalty in the high altitude, handing South Africa the victory and ending New Zealand's 22-match unbeaten run (the All Blacks drew with Australia earlier in the tournament).

The win wasn't enough for South Africa to win either the Rugby Championship or Freedom Cup - New Zealand won both.

Down by five points at halftime, a Beauden Barrett try and Dan Carter drop goal in the 60th minute secured the All Blacks a narrow 20-18 win over the Springboks to book New Zealand its fourth Rugby World Cup final appearance.

The All Blacks went on to beat Australia 34-17 in the final, securing New Zealand its third Rugby World Cup title.

Not rugby related but it shows that the two countries' great rivalry stretches beyond the oval ball.

The shot of South African-born Grant Elliott offering a hand to a deflated Dale Steyn after the former hit the winning six off the bowler in the penultimate ball showed a great sense of sportsmanship - much like the recent final at Lords where England's Chris Woakes comforted Martin Guptill at the end of the super over.

Another classic All Blacks-Springboks Test, South Africa stunned the All Blacks 36-34 in Wellington to secure its first victory in New Zealand since 2009.

*Due to only being 26, Matt can't remember anything pre-1992 so he extends his thanks to his elder colleagues; Jeremy Rees, Stephen Hewson, Barry Guy and Joe Porter for their help.