Novak Djokovic again proved the toughest of nuts for Roger Federer to crack as he repelled everything the Swiss could throw at him to claim his fifth Wimbledon title in the first All England Club final to be decided by a tiebreaker. 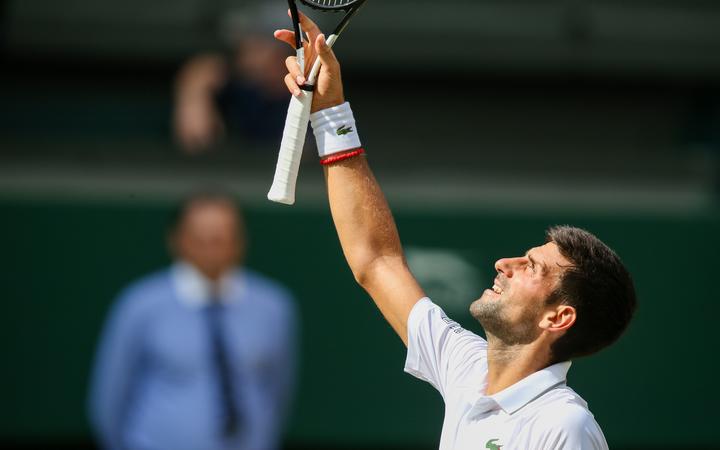 The defending champion was outshone at times on Centre Court and saved two match points deep into a gripping decider but he dredged his tank of mental and physical resilience to claim a thrilling 7-6(5) 1-6 7-6(4) 4-6 13-12(3) win.

Nothing could separate the players in an intoxicating final set and the match was already the longest Wimbledon singles final ever when the club's new rule stipulating a tiebreak at 12-12 in a deciding set was deployed.

Both players looked out on their feet after nearly five hours of compelling combat but, as he had done in the day's two other tiebreaks, Djokovic held his nerve to crush Federer's dream of claiming a ninth title and becoming the oldest man to win a Grand Slam in the professional era.

The top-seeded Djokovic moved 6-3 ahead and, after the final point had to be replayed following a Hawkeye challenge, he was able to celebrate a 16th Grand Slam title when a weary Federer ballooned a forehand off the frame of his racket.

Victory took the 32-year-old Serbian level with Bjorn Borg in fourth place on the all-time list of men's winners at Wimbledon and moved him four behind Federer on the all-time Grand Slam list.

"Roger is one of the greatest players of all time, who I respect a lot," Djokovic, who has now beaten Federer in three of the last six Wimbledon finals, said on court.

"Unfortunately one player has to lose and we both had our chances. It's unreal to be two match points down and come back."

Federer held serve to stay alive seven times in the deciding set but broke the Djokovic serve at 7-7 and served for the title. At 40-15 a sensational victory was in the palm of his hand but Djokovic was not done.

A forehand mistake cost Federer his first match point and then he watched aghast as Djokovic whipped a forehand winner across him as he closed in on the net.

Eight service holds then sent the match into a tiebreaker at 12-12, a rule brought in after last year's tournament.

Djokovic jumped ahead and, for once, Federer had run out of magic as he suffered one of his most heart-breaking defeats.

"It was a great match, it was long, it had everything. Novak, congratulations, man, that was crazy," Federer said.