Casting sentiment and history aside, an inspired Simona Halep has crushed Serena Williams with the performance of her life to secure her maiden Wimbledon crown. 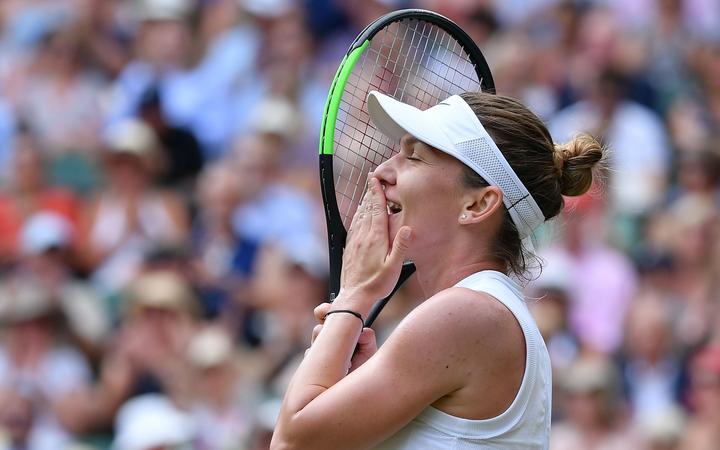 Halep shattered Williams' latest quest for a record-equalling 24th grand slam singles title with a merciless 6-2 6-2 victory in an unexpectedly one- sided final.

"It was the best match and of course Serena always inspired us, so thank you for that," Halep said.

"I have worked hard for this moment. I have no words to explain, but I feel great.

"It's something very special and I will never forget this day. It was my mum's dream.

"She said when I was 10 that if I want to do something in tennis, I have to play in the final of Wimbledon so the day came, so thanks.

"At the beginning of the tournament, I told people in the locker room that if I win I will get membership for life, it was one of the motivations for me, so now I'm happy."

In adding tennis's greatest prize to her 2018 French Open title, the 27-year-old is the first Romanian in history to reign at the All England Club.

And she added her name to the famous honours roll with a sublime display of grasscourt tennis.

Displaying no outward signs of anxiety or tension in her first Wimbledon final, Halep played lights out from the get-go, stunning Williams with a baseline barrage to charge ahead 4-0 inside 12 minutes.

"I had nerves - my stomach was not very well before the match but knew there was no time for emotions, so I just came on court and gave my best," the seventh seed said.

The two service breaks were enough for Halep to clinch the first set, and there was no let-up in the second as the underdog sealed victory over her fellow former world No.1 in 56 minutes.

It's the third time in 12 months that Williams has fallen a win short of matching Margaret Court's benchmark tally of 24 slams, having lost the 2018 Wimbledon and US Open finals to Angelique Kerber and Naomi Osaka respectively.

Obsessed in her pursuit of Court's record that has stood for 46 years, Williams had claimed to be entering this year's final at peace with herself, totally relaxed and calm ahead of her latest date with destiny.

But it didn't look the case as the hot favourite gifted Halep a service break in the opening game with three nervy unforced errors to set the tone for the match.

The Romanian then held to love and carved out another opportunity with some breathtaking ball-striking.

Finding the lines with some fearless groundstrokes, Halep claimed another break to storm to her 4-0 lead.

Williams received a rousing ovation from the equally shellshocked crowd after finally winning a game and then upped the ante in search of a way into the contest.

But Halep's extraordinary speed and counter-punching under pressure delivered her the first set in 26 minutes.

With two more breaks in the second set, the match was all over in less than an hour.

"She really played out of her mind," Williams said.

"It was little bit of deer in headlights for me, so whenever a player plays that amazing you just kind of have to take your hat off and give them a nod on the head.

"I've got just got to keep fighting and keep trying and just enjoy the sport. I love coming out and playing in front of you guys."