Kieran Read precariously sat upon his team mates shoulders holding the Super Rugby trophy aloft on Saturday, satisfied that he had ended his career with the Crusaders with one final title. 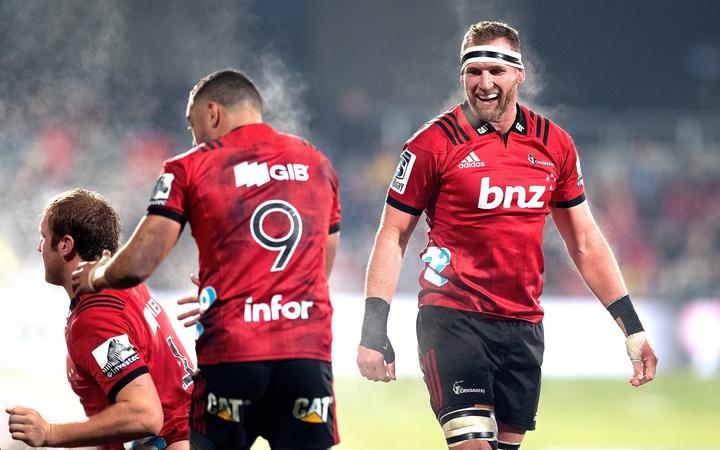 Read was instrumental in helping his side produce a clinical 19-3 victory over the Jaguares in Christchurch to complete a "three-peat" and win their 10th Super Rugby title.

The 33-year-old is heading to Japanese club Toyota after the Rugby World Cup this year and he left Christchurch content with the end to his Super Rugby career that began in 2007.

"It's given me everything," Read said of what the Crusaders meant to him in a televised interview. "I love this place.

"It's so special. (I'm) just really thankful and grateful to be able to put on the jersey so many times.

"We have got a group that is capable and you go out there and back each other up special things happen. It's nothing special in itself, it's just simple things done well and that's what this group does.

"It'll be a bit sad reflecting over the last couple of days, but I've absolutely loved my time."

The national captain is not the only All Blacks player leaving the team, with midfield back Ryan Crotty, prop Owen Franks and flanker Matt Todd also departing.

Flanker Jordan Taufua, who was named in the All Blacks squad last year but got injured and never played, is also leaving. All five have played more than 100 games for the Crusaders.

Fullback Israel Dagg retired mid-season from a long-standing knee injury, while team captain Sam Whitelock has the option of a sabbatical in his contract and may not be back next year either.

Assistant coaches Brad Mooar and Ronan O'Gara are also leaving and head coach Scott Robertson's chances of securing the All Blacks job when it becomes vacant after the Rugby World Cup in Japan received a boost with Saturday's win.

While the Crusaders have looked like the team to beat since the second week of matches, they have had a tumultuous season off the field.

The final was played 16 weeks after Christchurch became the site of New Zealand's worst massacre when 51 people were killed in a mass shooting at two mosques on March 15.

The shootings also dragged the team into a public debate about the appropriateness of their branding and name, which critics associated with the religious wars between Christians and Muslims in the Middle Ages.

The team initiated a review to see if there was a mood for change and said last month they would conduct a full review on a potential rebrand.

Robertson said he had to pull the team together after the shooting and fallout from the team's name and branding, but a simple message was all that was needed to hold them together.

"We kept tight, we kept clear. We knew who we were. We knew what we stood for," Robertson said.

"There are more goodbyes than normal. A lot of family will come into the changing room and it will be special because when they walk out of it, it's the last time that group is together.

"Thank God we can send them out on the right note. It was a massive relief."