Warriors coach Stephen Kearney has given up on talking about the NRL bunker following another howler in Saturday's escape over Newcastle. 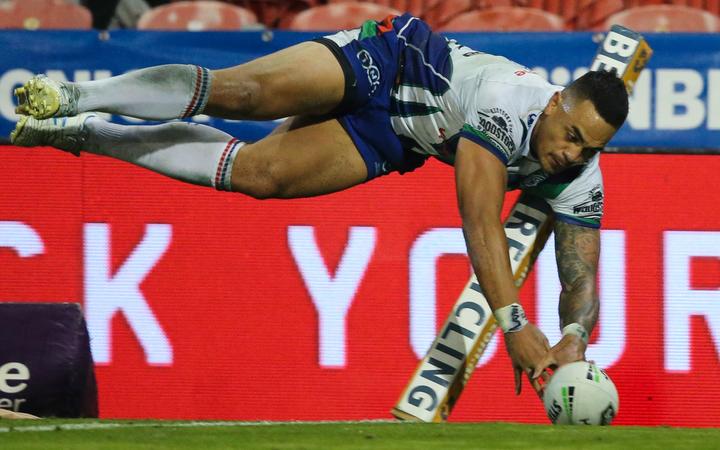 Ken Maumalo dives over in the corner but the try is controversially overturned by the bunker. Photo: Photosport Ltd 2019

A last-gasp try to Sam Lisone at McDonald Jones Stadium saved NRL officials from what would've been a controversial Knights win over Kearney's men.

Warriors winger Ken Maumalo thought he had sealed the two points when he dove for a trademark try inside the corner post in the 66th minute.

However, the video referee ruled Maumalo had lost the ball and overturned the decision, despite replays showing the winger planting down cleanly.

The call comes less than a week after NRL head of elite football Graham Annesley described the officiating in round 15 as "sloppy".

"I've given up trying to give my view on it because at the end of the day, they're pushing the button," Kearney said.

"Over the course of the last couple of weeks there's been a few howlers, but what's saying what I think about it going to change?

"There's no point pointing the finger and blaming ... We're all there. We saw it. I'm just happy that it didn't come down to that to decide the game."

Knights coach Nathan Brown also took aim at the referees for what he perceives as an increase in penalties compared to the start of the season.

Brown's side have won just one penalty count since round six, however he has also grown tired of seeking explanation from the governing body.

"At the start of the year they didn't want to penalise. (Now) they're looking for reasons to give away penalties," Brown said.

"But this is the risk that they open up when they start penalising all the time. You can send a thousand clips to them but it ain't gonna change anything.

"That's the reality of it.

"It's no good talking to them about it, it's not going to change anything. So just get on with it and hopefully we can be better, that's what we can work at."