Brent Naden scored an NRL try for the ages and James Maloney had the final say as Penrith snatched a dramatic 19-18 golden point win over the Warriors in Auckland. 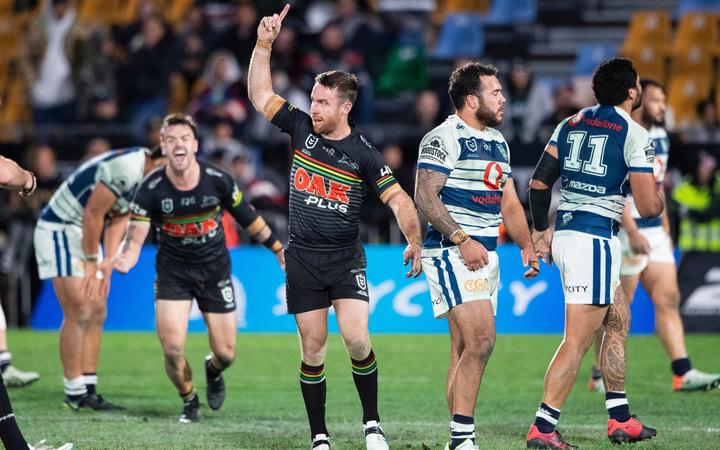 The Panthers unleashed one of the gutsiest performances seen on Mt Smart Stadium, overcoming two contentious sin bin rulings and a 10-point deficit to notch their fifth straight win.

Rookie centre Naden was the hero with two tries in the final half-hour, including a memorable 90-metre solo try with three minutes remaining to put his team two points in front.

Maloney was deemed offside from the subsequent Warriors short kick-off and Patrick Herbert held his nerve, levelling the scores with a 35m penalty in the final minute of regular time.

A week after his influential State of Origin performance for NSW and without injured halves partner Nathan Cleary, Maloney capped an exceptional game with the winning field goal, after he and opposite Blake Green had both missed earlier attempts.

Maloney also laid on two of his team's three tries, setting up a leaping Naden with a pinpoint bomb to start the fightback from 16-6 down.

The Warriors appeared destined to end their miserable run of home form when David Fusitu'a crossed after a fuming Penrith had been reduced to 11 players.

Maloney, who had a running battle with referee Gerard Sutton, was firstly enraged by Liam Martin's 10-minute punishment for repeated Panthers offending soon before halftime.

He believed he hadn't been given sufficient warning that a sin bin was looming.

The veteran's blood pressure doubled soon after the break when halves partner Jarome Luai was given his marching orders, reducing the visitors to 11 for three minutes.

Sutton deemed Luai had committed a professional foul for tripping Warriors skipper Roger Tuivasa-Sheck - a questionable ruling on two counts. The contact appeared accidental and Tuivasa-Sheck had already knocked on in the lead-up.

Maloney's men somehow regrouped in the most spectacular win of their mid-season revival, highlighted by 23-year-old Naden's defence shredding run in just his fourth NRL game.

The Panthers are now 11th on the NRL ladder, two points above the Warriors, who remain four points adrift of the top eight.