The women's pair of Grace Prendergast and Kerri Gowler dominated their race from start to finish in contrast to the women's double sculls where Olivia Loe and Brooke Donoghue only grabbed gold in last few strokes of their race.

Single sculler Emma Twigg, in her first international regatta since the Rio Olympics, also prevailed in a tight finish in the A final as the NZ team indicated they were mostly in good shape in Olympic qualifying year.

"This regatta was sort of a welcome back but also a shock to the system. We had clear goals for each race here and my goal for this race was just to enjoy it and find my rhythm and maybe that helped with the result," she said.

Twigg is chasing her third Olympics at Tokyo next year having finished fourth in the last two Olympics. 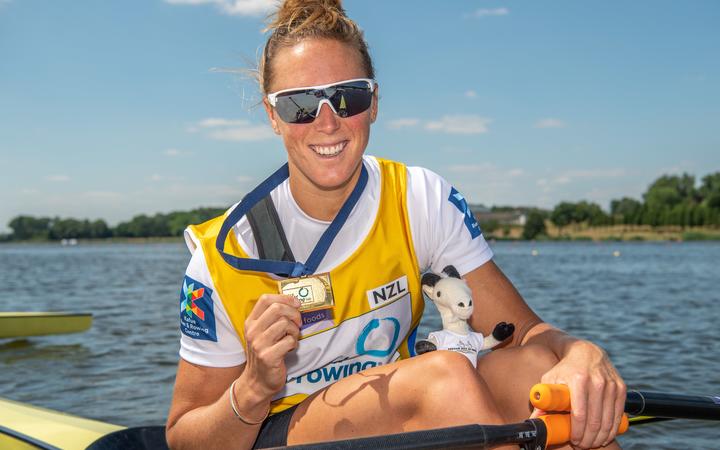 Emma Twigg after her win in Poland. Photo: Photosport

The women's light double sculls of Jackie Kiddle and Zoe McBride were awarded gold in a photo finish win over Italy.

There was disappointment though for men's single sculler Robbie Manson, who missed the A final and had to settle for victory in the B final.

With Olympic champions Hamish Bond and Mahe Drysdale on board their performance shows they are on the right track.

The New Zealand squad now moves onto the final final World Cup event of the season in Rotterdam before heading home to prepare for the August world champs.