Analysis: The home team setup at Mt Smart Stadium leaves you in absolutely no doubt whose house you're in. 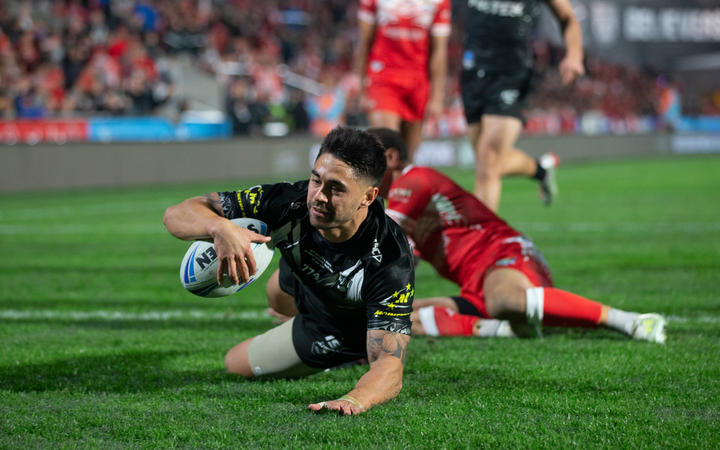 There's a gigantic mural covering one wall of a large room, celebrating the long, rich history of the Warriors, showing every aspect of their togetherness and fanbase.

It stretches up to a high ceiling that covers a large gym, complete with that unmistakable smell of plastic mats mixed with sweat.

There's a door underneath, leading to the changing room. So when Shaun Johnson emerged from it to talk to us after his three-try triumphant return to the ground he used to call home, it was obvious that he had a few things on his mind. He came in with a bit of a swagger, joking that he'd keep it short because he wanted to go back and have a beer with his teammates. But his interview ended up lasting even longer than the two men before him, Brandon Smith and Briton Nikora, combined.

After he was done, it was not hard to see why.

This was a man who thoroughly enjoyed showing New Zealand league fans just what he was capable of. A man who was lambasted for his response to the Kiwis' capitulation to Mate Ma'a Tonga and Fiji in the 2017 World Cup, then let go by the Warriors in the last off season. You hear a lot from players about how much an international jersey means to them, but after an experience like that the words clearly carry an awful lot of meaning.

"Any time you get to wear this jersey, you just don't take it for granted. You just know you're a caretaker." he said.

Not long before, out through the other door that leads to the field, Johnson had strode out with the rest of the Kiwis. They stood alongside Benji Marshall, who was in tears as the anthem played. It was that moment that made it clear this wasn't any old test match, indeed, it ripped the pre-match narrative around it being a celebration of Tonga right out of the hands of every red-flag waving supporter right then and there.

This was a game that was about the Kiwis, because this was their home turf. This was about utu, righting the wrong of two years past.

Johnson took a deep breath when talking about those years. He'd clearly been through a cathartic process over the events of the World Cup, when despite having home field advantage, the Kiwis blew out to their worst performance ever. Johnson, in particular, was slammed for some ill-judged post-match comments, in particular, one targeting critics in which he said 'youse got what youse wanted'.

Now though, he's making sure he's cleaned up his vernacular.

"Thinking back to 2017 and what a lot of us had to go through, like people will never understand what was going on behind the scenes - how we felt after we let our whole nation down. We copped a lot and deservedly too. To be a part of putting this jersey back in the place it should be... I think, bro I'm just so happy.

"I was really nervous about this game. I've still got memories about what happened in the World Cup and while it wasn't a grudge match, in my mind we needed this."

All the while, Johnson's eyes often darted around the cavernous Warriors gym setup. It's here that he spent so many hours smashing out weights, joking with his former teammates and walking through on the way out to another NRL game. It was an inevitable question as to how he felt standing back in there for the first time since his move to the Sharks.

"Some part of me still feels like this is home. I still love this place."

The club, despite the release, still shows that they honour him. There's a large picture of him on the wall of the gym, cataloguing his career achievements.

"It's a bit weird to see my picture up there, with an end date... like, that's all she wrote."

Johnson walked back into the changing rooms to have that well deserved beer. It was a night of redemption for the jersey he spoke so highly of, and the players who pulled it on.