First-five Richie Mo'unga grabbed two tries in a flawless 23-point game as the Crusaders stormed into the Super Rugby semi-finals with a 38-14 hiding of the Highlanders in Christchurch. 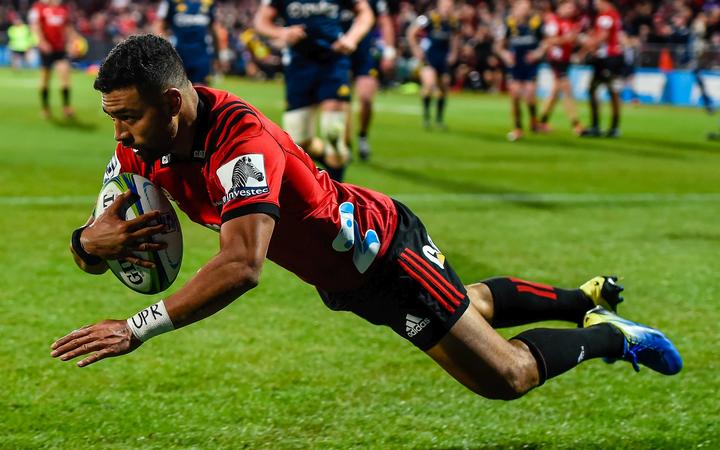 With a breathtaking blend of defensive grunt and attacking inspiration, the double defending champions kept their perfect home record in playoffs intact and extended their unbeaten winning streak at Rugby League Park to 29 matches.

They will return to the venue to meet the winner of the Hurricanes and the Bulls, who play their quarter-final on Saturday.

"We knew it was going to be tough, quarter-finals are always tough," Crusaders captain Sam Whitelock said.

"We knew these guys were going to try to pin us down in our own half ... We want to pressure every team right across the board.

"To get the win is what you need and we got it."

All Black Mo'unga had an outstanding night, grabbing a try in each half and slotting all five conversions and an early penalty.

It was a tougher night for his All Blacks team mate Liam Squire, who was yellow carded early in the second half for a shoulder charge after the Highlanders restricted the home side to a 17-14 lead at the break.

It proved the turning point as the Crusaders ran in two tries to blow the game open while Squire was in the sin-bin.

"Obviously we prepared to come up here and give it our best shot and we were in it for most of the game," said Highlanders co-captain Luke Whitelock.

"They're very good at what they do and they execute it really well."

The Crusaders came into the match after a week off and it showed in a scrappy opening quarter as they struggled with a few handling errors and a shaky set-piece.

They allowed the visitors the first try in the 17th minute as centre Rob Thompson made a brilliant step and offload to Ben Smith to crack open the Crusaders defence, with the departing co-captain putting winger Sio Tomkinson across near the left corner.

The home side snatched back the lead, however, with an unmarked David Havili jogging through a huge defensive hole to cross under the posts.

The Highlanders could do little about the Crusaders' second try, as Scott Robertson's men launched a breathtaking raid from midfield to the right corner.

A majestic offload by George Bridge to Whetu Douglas was flicked wide to Mo'unga who crossed and converted his own try to put the Crusaders up 17-7 in the 28th minute.

The Highlanders rallied again, rumbling forward to earn a scrum near the try-line.

Halfback Aaron Smith hurled a long, flat pass wide to inside centre Teihorangi Walden who burst through and planted the ball just over the line as the Highlanders kept in touch in a relentless first half.

Five minutes after the restart, however, Squire was sin-binned and the Highlanders unravelled.

A defensive blunder giftwrapped the Crusaders their third try in the 48th minute as the Highlanders stood off a rolling maul and allowed Douglas to barge over.

With Squire still stewing in the sin-bin, replacement prop Michael Alaalatoa grabbed the Crusaders' fourth five-pointer, with Mo'unga kicking the Crusaders to a 31-14 lead into the final quarter.

Mo'unga capped a fine individual performance by grabbing his second try with brute strength in the 69th minute, rushing forward to chase a kick over the line and ripping the ball off Marty Banks in mid-air before planting it down.