New Zealand Rugby League (NZRL) is considering a Kiwis-only selection policy to prevent the sort of player "flip-flopping" it says is eroding the integrity of the international game. 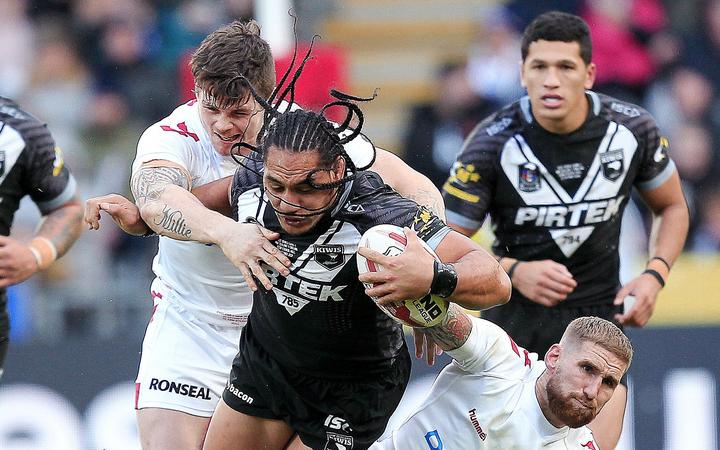 Martin Taupau is switching the black jumper for blue after announcing he'll go back to representing Samoa. Photo: Photosport

Chief executive Greg Peters will ask the governing body, the Rugby League International Federation (RLIF), to tighten the regulations that allow current players to change their allegiances at will between tier one and two nations.

He will also oversee a review into the NZRL's own selection policy, saying it may be time to close the door on players who have represented other countries.

The pair announced their intentions within days of their inclusion in a wider New Zealand squad named to prepare for Saturday's Test against Tonga in Auckland.

I’ve got a very important announcement that i would like to make pic.twitter.com/nO8ms1gTvk

Mate Ma'a features eight former Kiwis, several of whom famously deserted the black jersey in a confused lead-up to the 2017 World Cup.

Peters agreed the "Tongan phenomenon" at what was a highly competitive World Cup and the improvement of other Pacific nations was the upside of the loose regulations.

However, he said the changing international landscape meant it was time to clamp back down.

More annual tests across the board, beginning with this year's Oceania Cup, meant it made sense to return to a system similar to pre-2016, when players could only switch once in a World Cup cycle.

Peters said a two-year international declaration would achieve balance, still freeing up the rights of those who wanted to switch for heritage reasons.

"It would remove the uncertainty of players just waiting to see if they're in or not and then jumping, which doesn't look good for the game," he said.

"From an integrity point of view we don't want to see players flip-flopping between countries."

If regulations don't change, the NZRL may introduce protocol in which players such as Taupau and Isaako aren't considered for the Kiwis again.

"We're working through that sort of internal policy," he said.

"Obviously we want people who are dedicated to the jersey. They're the people we want in our Kiwis team."