American Gary Woodland has won his maiden major title with a three-shot victory at the US Open at Pebble Beach. 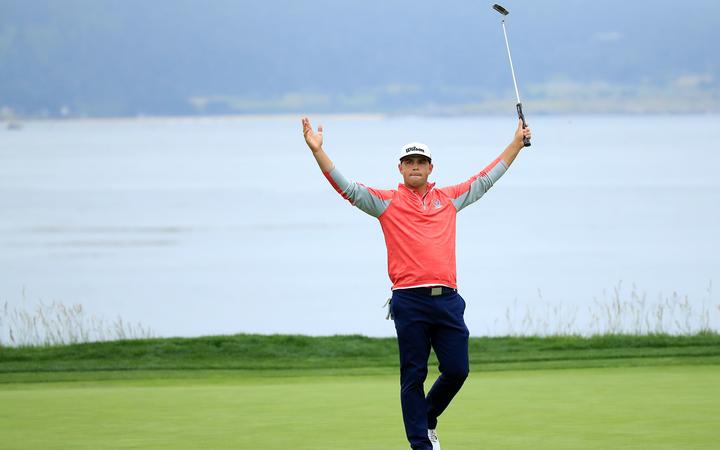 Woodland held off a late challenge from two-time defending champion Brooks Koepka to finish the tournament at 13 under.

The 35-year-old shot a two under 69 in his final round, finishing the tournament with a 30 foot birdie putt on the par 5 18th.

"Just glad it was over," smiled Woodland. "I didn't let myself get ahead at all today.

"Didn't ever let myself think the tournament was over.

World number one Koepka went down fighting, finishing with a three-under 68 to leave him three short of Woodland's winning total of 13-under 271.

Justin Rose began the day one shot back of Woodland but the Englishman crumbled on the back nine with three bogeys for a three-over 74 and a tie for third at seven-under with Xander Schauffele, Chez Reavie and Spain's Jon Rahm.

It was a remarkable display of determination and guts by the 35-year-old Woodland, who seven times before had held a 54-hole lead in a PGA Tour event and seven times could not close the deal.

As Woodland made the turn with a two-shot lead, faint cracks in his composure began to show as Koepka trimmed the advantage to one with a birdie at 11.

With tension building with each shot, Woodland kept his cool and collected his first birdie of the back nine at the par five 14th to reclaim a two-stroke advantage and turn the US Open into a two horse race.

Rose, who saw the red-hot putter that had come to his rescue so often during the week suddenly turn cold, had his bid for a second US Open title seriously wounded with back-to-back bogeys at 12 and 13 and then killed off completely with another at 15 that dropped him five off the pace with three to play.

Down to the closing two holes and a relentless Koepka had one last opportunity to put pressure on Woodland with a birdie at the 18th that would have left his opponent clinging to a one-shot lead coming home.

But Koepka watched his nine-foot putt slip by the cup, settling for a par to give Woodland some breathing room.

"I hit a good putt, it just dove right across the front," said Koepka. "Sometimes there's just nothing you can do.

"I thought it would be nice to put some pressure on him, one shot going into the last hole.

"Nothing I could do. I gave it my all. I give it my all every time and sometimes it's not meant to be."

A maiden major now within his grasp, a relaxed Woodland capped off his round in spectacular style, rolling in a 30-foot birdie at the last to trigger a standing ovation and chants of "Gary, Gary".

Tiger Woods, a three-time US Open winner, had ended the third round 11 shots back of the leader but still gave himself a chance of winning a 16th major on Sunday.

Those slim hopes disappeared quickly when he bogeyed four of his opening five holes.

Woods hit back with six birdies, including one at the 18th, for a two-under round, his lowest final round at a US Open in a decade but still 11 back of winner.