An ice cool Gary Woodland held his nerve under mounting pressure to secure a one-shot lead heading into the final round of US Open after seeing off challenges from Justin Rose and Brooks Koepka at Pebble Beach on Saturday. 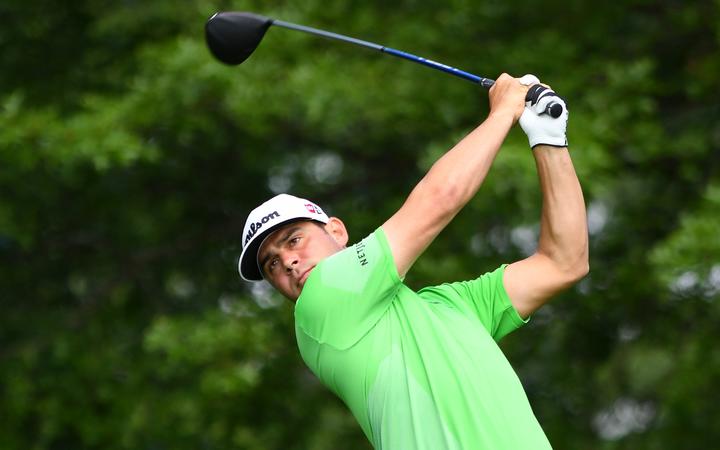 Woodland, who could not manage a top-10 finish in his first 27 majors, looked as if he played for the biggest prizes in the game every week as he carded a third round two-under 69 that featured three birdies and a lone bogey.

If Woodland faced intense pressure on Saturday, it is nothing to what awaits him on Sunday with former winners Rose and Koepka breathing down his neck and major champions Louis Oosthuizen and Rory McIlroy lining up to take a run.

"We just got to play golf shots and hopefully come up with one less than anyone else," said Woodland.

"Sleep is not an issue, I'll be rested for tomorrow. I'm playing pretty good, I'm comfortable with my game, we're at Pebble Beach for the US Open so should be pretty exciting."

Rose, US Open champion in 2013, started the day two shots back and ended it with a birdie for a three-under 68 that trimmed Woodland's advantage to a single stroke.

Both Woodland and Rose will be looking over their shoulders for Koepka, who had a tidy bogey-free 68 that left him four off the pace with his hopes of becoming the first player in over a century to sweep three straight US Opens very much alive.

Also lurking four back are South African Oosthuizen, the 2010 British Open champion who carding a one-under 70, and Chez Reavie, who fired a 68 to move into contention.

Not to be overlooked is McIlroy, who returned a scrappy 70 to leave him five back but not out of range of a second US Open title.

A three-time winner on the PGA Tour, Woodland began smartly picking, up two birdies on his outward nine and at one point increased his advantage to four strokes.

But a bogey at the eighth, his first in 34 holes, combined with a Rose birdie cut the advantage to two.

Woodland posted just one birdie on back nine that was highlighted by two huge par saves, a chip in for par at the 12th and monster 43-foot for another at 14 that kept him from losing ground to Rose.

"When I chipped in on 12 and made the long putt on 14 for par, he (Rose) executed putts right after that on top of that," said Woodland. "He's been putting well all week.

"I'm just trying to stay within myself. I'm trying to extend the lead.

"I'm trying to execute everything to the best of my ability, and I've done that really well."

Two of the Pebble Beach headliners Tiger Woods and Phil Mickelson will be reduced to opening acts on Sunday, going off early after disappointing third rounds saw them drop out of contention.

Woods, nine back to start the day, began his round in the same frustrating fashion that he ended the second round -- with a bogey -- and did nothing to improve his mood by picking up another at the third.

The early miscues appeared to fire up the 15-time major winner, and Woods responded with back-to-back birdies but the relief was only temporary as he gave back those two shots with bogeys at seven and 12.

Woods birdied three of his final five holes, including the 18th but it was too little to late an even-par 71 leaving him at even par for the tournament and 10 behind the pacesetter Woodland.

While Woods at least walked off on a positive note, Mickelson signed off with a triple bogey. Runner-up at US Open a record six times and needing a victory here to complete the career grand slam, Mickelson will not get it done this year after signing for four-over 75 to leave him at three-over going into Sunday's final round.