Kawhi Leonard scored 17 of his 36 points in a decisive third quarter, and Serge Ibaka scored 20 points off the bench Friday night, leading the Toronto Raptors to a 105-92 victory over the Golden State Warriors in Game 4 of the NBA Finals. 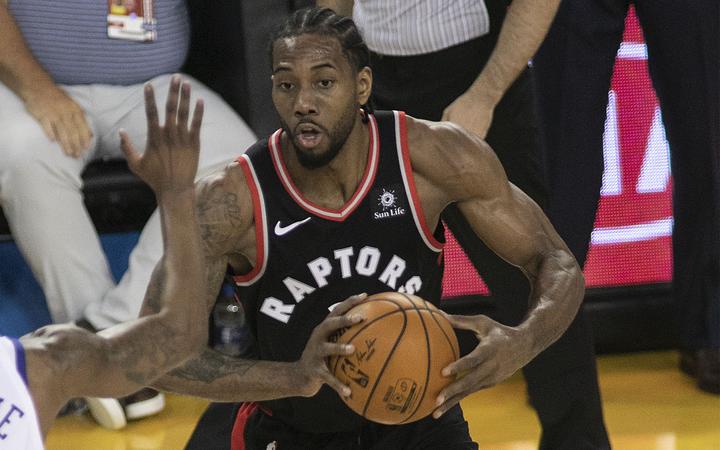 A scrambling and double-teaming Toronto defence harassed Warriors star Stephen Curry into 2-for-9 shooting on three-pointers in a loss that put the two-time defending champions in a 3-1 hole in the best-of-seven series.

"Kawhi's two big threes to start the half really I thought changed the whole feel for everybody," Raptors coach Nick Nurse said of Leonard, who also hauled down 12 rebounds.

"I just thought everybody was like, 'okay, we know we are here, let's go'. And we just kind of kept going from those two threes."

The Raptors will go for their first NBA championship at home in game five on Monday night. Only once has a team overcome a 3-1 deficit to win the finals -- when Cleveland did so to top Golden State in 2016.

In winning for a third straight time in Oakland this season, including once in the regular season, Toronto rallied from an 11-point, first-quarter hole by outscoring the Warriors 93-69 over the game's final 37 minutes.

The Raptors' biggest push came in the third period, when they finally got their offence on track and added 37 points to their 42-point halftime total while taking the lead for good.

The Raptors' pull-away began with an Ibaka three-pointer that broke a 61-all tie with four minutes remaining in the third quarter.

Toronto finished the period on an 18-6 run, with Leonard (11) and Ibaka (seven) producing all the points, propelling the Eastern Conference champs into a 79-67 advantage.

The Raptors easily held on from there despite losing key reserve Fred VanVleet to a cut under his right eye, which required stitches, with 9:35 to go.

Using a suffocating defence to thwart any serious Golden State comeback bid, Toronto built their lead to as many as 16 early in the final period before holding on.

Leonard's 36 points were the product of 11-for-22 shooting overall and 5-for-9 accuracy on three-pointers. It was his 14th 30-point game of the postseason and third straight in the Finals. He also found time for a game-high 12 rebounds.

Ibaka, who had totalled just 18 points in the first three games of the series, finished with his biggest playoff output since scoring 23 in the first round last season against Washington.

Pascal Siakam added 19 points and Kyle Lowry 10 for the Raptors, who improved to 4-0 in Game 4's this season.

Klay Thompson, returning from a one-game absence due to a strained hamstring, led the Warriors with 28 points on 11-for-18 shooting. He made six of his 10 3-point attempts.

Curry, who poured in 47 points in Golden State's game three loss, finished with 27.

Draymond Green recorded a 10-point, 12-assist double-double, and Kevon Looney, returning from a shoulder injury, chipped in with 10 points for the Warriors.

Golden State played again without standout forward Kevin Durant, who remains a possibility to return from a calf injury in game five.