Sports Call - The connection between New Zealand and Japanese rugby is growing all the time, with partnerships popping up all over the place. 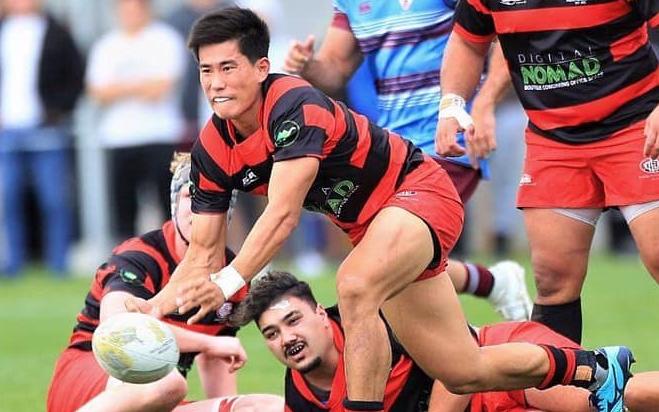 Not only is the Asian country, host of this year's World Cup, becoming a leading destination for New Zealand players and coaches, but Aotearoa is also hosting it's fair share of Japanese talent.

Shouts of Japanese can often be heard at the Hurricanes base in Wellington, with players and coaches from Top League side Ricoh training with the Super Rugby franchise as part of a three-year agreement.

Halfback Toshiya Takahashi is one of those players, also spending a second season with the Poneke club. He was assigned a team last year, but he enjoyed his time in Kilbirnie so much he asked to return.

"Everyone is very kind and keep calling me Toshi .... and get me involved in everything.

"We have some very close games last year and when Poneke [wins], it was a very good memory for me."

Listen here to the audio version of this article

Takahashi's time in New Zealand is paying off.

"Last year before I came to Poneke I was the number three halfback at Ricoh, then when I went back after a year in New Zealand, I became Ricoh's number one halfback."

Eito Tamura took a much bigger leap of faith, leaving Japan at the tender age of 10 to chase his rugby dream.

He landed at Napier Boys High and then Poneke, before using New Zealand rugby as a way to get back to Japan.

"I was here playing and I got an offer to go and play for a Japanese team in the Top League [Tamura captained and played in the midfield for Sanix].

"I took that opportunity and that's something I wanted to do, make rugby into a career and I did, thanks to this club [Poneke]."

The benefits to Japanese players are obvious, but what does New Zealand rugby get out of the arrangement?

Local clubs, even storied ones like Poneke, are struggling with ever declining male player numbers and the extra imports boost both the number and quality of players.

Hurricanes chief executive Avan Lee said their arrangement with Ricoh opens up commercial opportunities in the much larger Japanese market.

"Off the back of the 2015 Rugby World Cup, how well the Japanese performed to beat South Africa. Then they played Scotland in the next game and 25 million people watched it live in Japan. An All Blacks game in New Zealand, on average it will only be watched by 600,000 people live."

And It's not just at the top level, Rich Freeman is a Yokohama based journalist who's been covering rugby in Japan for 20 years.

He said Japanese players are playing high school rugby in New Zealand on a regular basis.

"A guy named Mark Ealey does a lot of work with St Bedes (Christchurch), which is where former Chiefs star and Japan captain Michael Leitch came from.

"Mark's son Nick is playing at Kobe Steelers in Japan as a first-five, one of Dan Carter's back-ups. Christchurch Boys' High have had a number of Japanese players over the years. There are a lot of Japanese kids going down to New Zealand now for secondary school."

Freeman believes those players are reaping the rewards of a New Zealand rugby education.

"The Japan under 20 team, that is going to be playing in the Pacific Cup this year, there's six Japanese kids in the squad that have their high school listed as New Zealand high school."

It's not a one-way street either, with plenty of New Zealanders coaching and playing in Japan, while All Blacks boss Steve Hansen is reportedly heading to Toyota as their new director of rugby after this year's World Cup, taking compatriot, and current NSW forwards coach, Simon Cron with him.

So the Japan/New Zealand rugby connection grows stronger by the season as does New Zealand's influence on rugby in the land of the rising sun.