The 38-year-old Dixon was named a Companion of the New Zealand Order of Merit.

The win in Detroit is Dixon's first of the year and and the 45th of his career, and moves him to within seven victories of equalling Mario Andretti for second place on the all-time Indy car list.

He now sits fifth on the drivers championship. 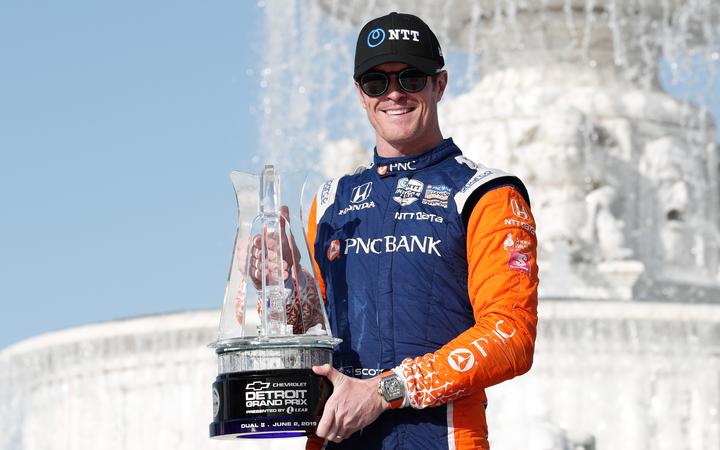 Scott Dixon registered his first win of the year in Detroit. Photo: Indycar

Dixon recovered from a crash and last-place finish on Saturday to win the second race of the weekend's doubleheader.

He crossed the Raceway at Belle Isle Park finish line 1.9419sec ahead of rookie Marcus Ericsson, who posted his first podium finish in his eighth series race.

Dixon led for 44 laps of the tight and bumpy circuit - including the last 21 on the 14-turn, 3.78km temporary street course - in the No. 9 PNC Bank Chip Ganassi Racing Honda.

"Today was all about redemption," said Dixon, adding he felt like "an idiot" for crashing by himself in Saturday's race.

"I had a pretty good headache and my wrist was pretty sore after that one (yesterday's crash)."

"Most of it was just trying to keep track temp, or temp in the tires. It was such a tricky situation, especially on the blacks (Firestone primary tires). When they had a few laps on them, it just felt like they picked up the concrete.

"I can't thank the PNC Bank crew enough - it was a tough day yesterday. I just drove the wheels off it and they did all the strategy, and the strategy is what nailed it.

"So I can't believe we've ended up here today and it's just fantastic. Fantastic."