The Black Caps are confident wicketkeeper Tom Latham will be fit for their first game of the Cricket World Cup. 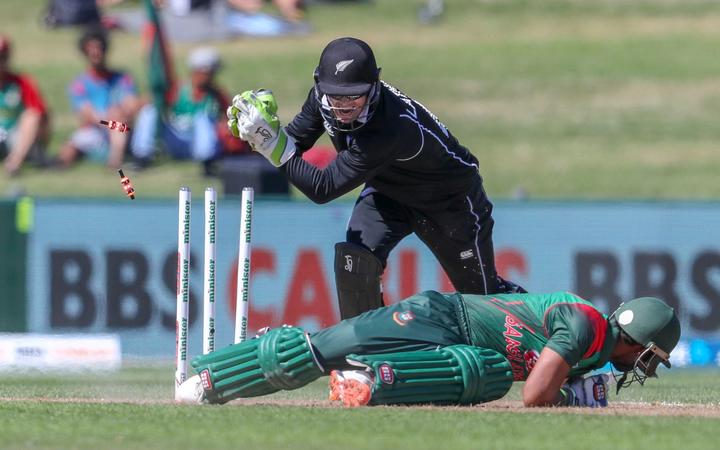 Black Caps wicketkeeper Tom Latham pulls off a stumping in an ODI against Bangladesh. Photo: Photosport

Recovering from an fractured finger, Latham has trained fully for the first time ahead of Saturday night's clash with Sri Lanka in Cardiff.

Latham said he felt no pain or discomfort as he batted in the nets and caught balls at full pace.

"Yea, a nice workload with it today, tried to increase things a little bit more in terms the targets we wanted to hit.

"It's been nice to get through training today but we'll still wait and see how it pulls up tonight and tomorrow."

Latham suffered a minor fracture at the tip of the middle finger on his left hand while wicketkeeping for the New Zealand XI during their third and final 50-over match against Australia in Brisbane earlier this month.

His finger was placed in a splint, before x-rays later revealed the fracture.

A surprise pick in New Zealand's World Cup squad, back-up gloveman Tom Blundell proved his capabilities while standing in for Latham in their second and final warm-up match this week.

The Wellingtonian hit 106 off just 89 balls in the Black Caps in their 91-run loss to the West Indies.

Blundell also hit a composed 77 in the New Zealand XI series against Australia in Brisbane.

Black Caps coach Gary Stead confirmed signs were positive for Latham but added they would still need to monitor him closely.