A rampant New Zealand have kicked off their FIFA U-20 World Cup campaign sweeping aside Honduras 5-0 in Poland this morning. 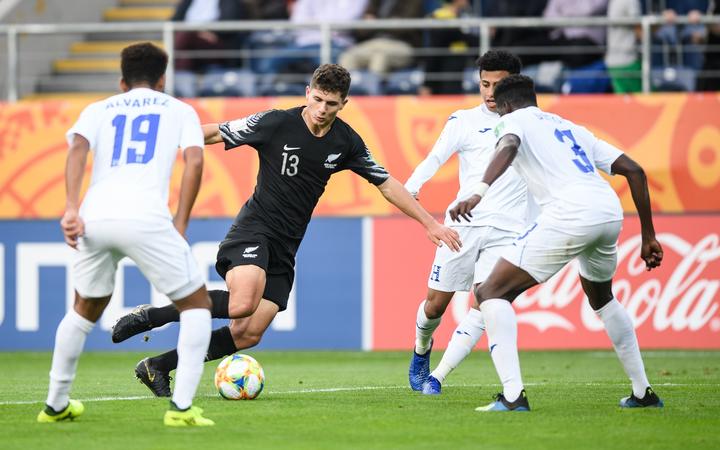 Coach Des Buckingham had called for his players to express themselves on the ball and they did just that with some scintillating spells of attacking football in front of nearly 5,000 fans at Lublin Stadium.

Teenage striker Ben Waine was the hero with a double while fellow Wellington Phoenix player Sarpreet Singh also found the net and was joined late on by Matt Conroy. New Zealand had earlier taken the lead within eight minutes through an own goal.

"It's an unbelievable feeling," Waine said.

"A couple of years ago when this tournament was being held in New Zealand, I was a ball boy behind one of the goals so I can't believe it to be honest. But what a performance today from the boys," he added.

"This is everything we've been building up to and we've put a lot of work into this tournament so it's awesome to see it coming off. It's what we deserve."

After an extensive build-up and impressive results in pre-World Cup friendlies against Korea Republic and Mexico, hopes were high for a bright start to the tournament. But even Buckingham must have been surprised at just how dominant New Zealand's display was, the Oceania champions taking full control from the opening whistle and showing no mercy on the Central Americans.

With a front three of Callum McCowatt, Elijah Just and Waine in fine form, New Zealand caused problems for Honduras time and again with their pace, movement and creativity. Singh pulled the strings behind that trio at the point of the midfield while Liberato Cacace and Callan Elliot also proved major attacking threats on either flank from their fullback positions.

While it was the quality of his side's offensive play that caught the eye, Buckingham was also indebted to outstanding displays from the likes of holding midfielders Joe Bell and Gianni Stensness while Nando Pijnaker and George Stanger were impeccable at the back with Michael Woud providing a safe pair of hands behind them.

The result did not look in doubt from the eighth minute when McCowatt played in Bell down the right and the skipper slid a ball into the box that Singh couldn't quite reach but was turned in anyway by an unfortunate defender.

It was two-nil soon after in similar fashion but this time from the boot of a New Zealand player. Singh played in Just with a perfectly-weighted pass and he crossed for Waine to tuck home his first World Cup goal on tournament debut.

New Zealand were already in dreamland but it got even better as they went three up within 27 minutes, more fantastic interplay producing another goal of high quality. Cacace showed good skill and composure to cut the ball back for Bell and he picked out Waine, who headed in on the bounce for his second.

The Kiwis carved out several further chances and Woud was rarely troubled at the other end but Honduras held on until the break. Buckingham's side then picked up where they left off, Just latching onto a long pass and finding Singh to go one-on-one with the goalkeeper and notch his side's fourth.

It looked like it would stay at 4-0 as the clock ticked into additional time but Conroy, who had come off the bench shortly after half-time, was not going to let such an opportunity pass without getting on the scoresheet. He made it five when the Honduras defence was again stretched to the limit and a stranded goalkeeper could only look on as he found the net via the cross bar.

It was New Zealand's largest ever winning margin at this tournament and puts them in a strong position going into further Group C matches against Norway and Uruguay.

They will next take on Norway at Lodz Stadium in Lodz on Tuesday at 6.30am (NZT).