Wallabies fullback Israel Folau has swapped rugby for religion in his profile photos on social media amid reports his contract by Rugby Australia will be terminated this week.

Folau, a fundamentalist Christian, is awaiting sanction after being found guilty of a high-level breach of Rugby Australia's code of conduct for a post on social media that said hell awaits 'drunks, homosexuals, adulterers' and others.

The three-member panel is expected to announce its decision this week.

On Tuesday, Folau replaced his profile picture on his social media accounts with a graphic of the number '1' which says "God first".

His previous profile picture was a photo of himself pointing at the sky after scoring a try for the New South Wales Waratahs, his Super Rugby club.

Some in local media read the change as a sign Folau had accepted his rugby union career in Australia was over. 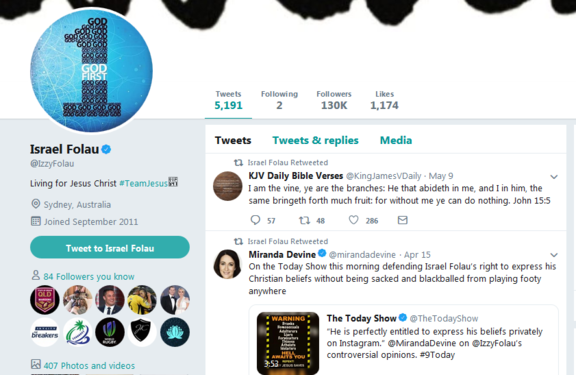 Rugby Australia (RA) and the Waratahs announced their intention to terminate his contract for "disrespecting" people on the basis of their sexuality weeks before his code of conduct hearing.

Folau triggered similar controversy a year ago for a post that said gay people would go to hell if they did not 'repent', and was warned repeatedly over his use of social media, according to RA chief executive Raelene Castle.

Sydney's Daily Telegraph newspaper reported earlier that Folau had turned down a $A1 million settlement to walk away from his four-year contract, which is reported to be worth $A4m.

Folau told his church congregation on Sunday that he had been given chances to return to rugby but had rejected them because it was the work of "Satan" to be offered "stuff that could look good to the eye".

Both RA and the 73-test back, the record try scorer in Super Rugby, will have the right to appeal if unsatisfied with the panel's verdict.

Folau's offending post, which has attracted more than 57,000 'likes' and over 52,000 comments, remains on his Instagram page.