A diving one-handed catch may have been all for show if you ask his teammates, but Steve Smith's acrobatics are proof he's got his surgically-repaired elbow in mind ahead of next month's World Cup. 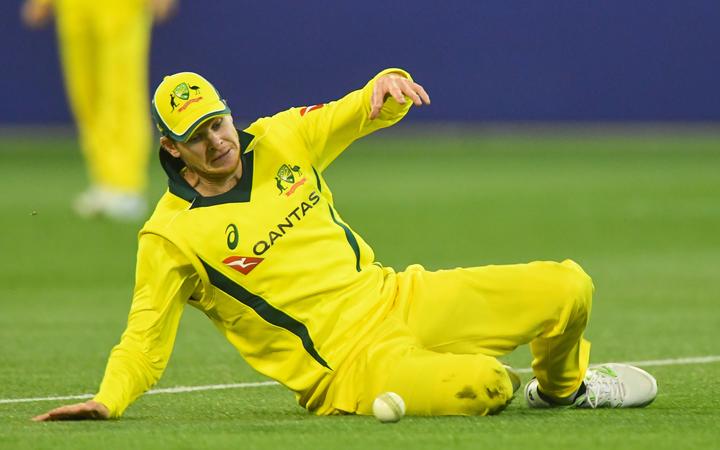 The former Australian captain returned to the fold after his year-long suspension in Monday's one-wicket warm up game defeat of a New Zealand XI in Brisbane.

He struck 22 coming in at No.4 and had earlier taken a diving, one-handed catch just above the ground to dismiss Tom Latham at Allan Border Field.

That effort set tongues wagging to the amusement of teammate Nathan Coulter- Nile, who had earlier taken three wickets and struck a vital 34 as Australia stumbled home in pursuit of 216.

"Bit of carry-on, wasn't it? I thought he could've got there on his feet," the quick said with a grin.

"But he's actually gotten really good at rolling off his elbow, done a lot of practice on that, even when he dives like that one-handed."

Smith's elbow was heavily strapped and he fielded either in the slips or inside the ring, avoiding the need to throw over any significant distance.

He had surgery in January and allayed fears of re-injury late last month after taking a spectacular outfield catch for IPL team Rajasthan Royals.

He said at the time he was throwing at "probably 70 or 80 per cent" and expected to be at 100 per cent well before the side's World Cup defence begins against Afghanistan on June 1 in Bristol.

Smith looks set to return to Australia's middle order after effectively squeezing out the in-form Peter Handscomb from the squad.

Coulter-Nile said Smith's experience, particularly in the field, would be crucial but that it hadn't changed much else for a team on an eight-game ODI winning streak without him and David Warner.

"I don't think it does (add confidence to the batting order); the blokes who missed out were so unlucky," he said.

"Petey was smacking them, we were so confident with him walking in.

"It's just experience (that they bring) ... they've seen so much cricket, know what's going on.

"Having Steve Smith or David Warner standing at mid-on, mid-off having a chat (while you're bowling) is invaluable."

Australia plays the second of three games against the Black Caps on Wednesday.