Disgraced Australian cricketers Steve Smith and David Warner will make their unofficial returns for Australia from year-long suspensions after being selected to play against New Zealand in their opening World Cup warm-up game in Brisbane.

The former Australian captain and vice-captain are listed to bat at No.4 and No.3 respectively, with Aaron Finch winning the toss and electing to bowl first at Allan Border Field.

It's the first time Smith and Warner have donned Australian colours since the Cape Town ball-tampering affair in March 2018.

Australia were clapped onto the field by the small crowd, with one fan yelling out "welcome back Smithy" as they walked through the gates. 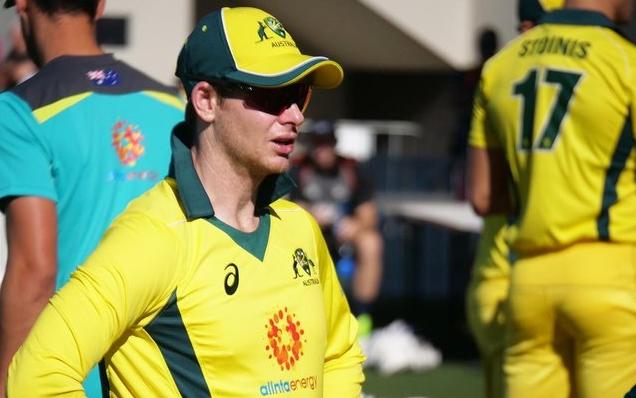 Steve Smith has donned Australian colours for the first time in more than a year. Photo: Supplied

Patrick Cummins wasted no time getting into the groove, taking two wickets in the game's first over - with the New Zealand XI 2-2 after the first over with George Worker and Henry Nicholls the batsmen out.

Shaun Marsh is expected to bat at No.5, with Glenn Maxwell out of the side and Usman Khawaja named to resume his opening partnership with skipper Finch.

Australia coach Justin Langer insists there has been no awkward moments since Warner and Smith's return from what he described as a humbling experience for Australian cricket in South Africa.

While stripped of any official leadership roles, he said the pair would play a big part in Australia's World Cup defence, which is immediately followed by an Ashes campaign.

Warner was in terrific form in the IPL, scoring 692 runs in 12 innings - including eight fifties and a century.

Langer remained coy on who will open the batting in England, with Warner, Finch and Khawaja all options to face the new ball against Afghanistan on June 1st.