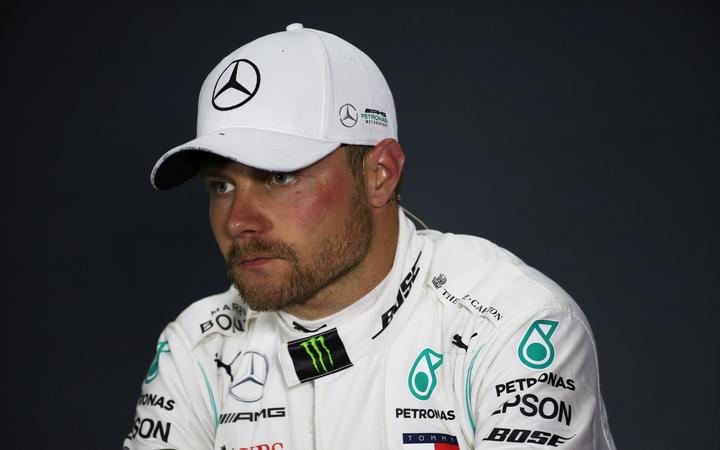 The Finn, who started on pole position, crossed the line 1.524 seconds ahead of Hamilton to make up for the agony of 2018 when he was denied victory in Baku by a late puncture.

"It's certainly redemption for him," commented Mercedes boss Toto Wolff.

The Mercedes pair are now separated by just one point with 17 races remaining, with the Silver Arrows 74 points ahead of Ferrari in the constructors' standings.

"It was actually a tough race," said Bottas, who went side-by-side with Hamilton on the opening lap and showed plenty of grit and determination in fending off the Briton to hold position.

"Lewis was putting pressure all the time, I could not do any mistakes," added the 29-year-old who came under renewed threat from Hamilton in the dying laps.

Sebastian Vettel in his Ferrari was a distant third as the Italian pre-season favourites again failed to rein in their rivals.

The win around the streets of the capital Baku was the fifth of Bottas' career and he became the first driver this season to win from pole.

Like Hamilton, he now has two wins and two second places but is ahead thanks to the extra point he scored for setting the fastest lap on his way to victory in the Australian season opener.

"I was too friendly at turn one and basically gave it to him," said Hamilton, who has 86 points to his team mate's 87.

Max Verstappen was fourth for Red Bull ahead of Ferrari's Charles Leclerc.

The Monegasque, the pole-position favourite who crashed in qualifying but still started eighth, led the race at one point after staying out longer than rivals who pitted to change their softer tyres.

While fading tyres meant he ultimately had to settle for fifth, Leclerc took the extra point for fastest lap after making a second stop for fresh tyres late on with a comfortable buffer to those behind and no risk of losing the position.

Mexican Sergio Perez was a strong sixth for Racing Point, after an excellent start that saw him move up to fourth at the first corner, ahead of McLaren's Carlos Sainz and Lando Norris.

The points were Sainz's first of the campaign and helped lift McLaren to fourth overall in the constructors' standings.

Verstappen reclaimed fourth place on lap six and then Leclerc went past Perez a lap later, also passing the Red Bull and taking the lead on lap 14 when those ahead pitted.

Lance Stroll gave Racing Point a double points finish with ninth place, while Alfa Romeo's Kimi Raikkonen took 10th after starting from the pitlane -- the Finn continuing his record of scoring in every race so far this season.

The main surprise of the day was the lack of upsets, with no safety car on track and no major crashes on the unforgiving streets that have given the race a reputation for unpredictability and chaos.

The most notable incident involved Daniel Ricciardo and Daniil Kvyat, with the Australian running off while trying to overtake the Russian and then reversing his Renault back into the Toro Rosso after both had stopped.

Both drivers retired shortly after, with Ricciardo handed a three-place grid penalty for the next race in Spain.

"I obviously don't feel good about what just happened," said the Australian.

Pierre Gasly's Red Bull lost power in the late stages of the race, parking down an escape road but prompting the deployment of the virtual safety car as marshals moved it.

Robert Kubica, who started from the pitlane after a qualifying crash, was hit with a drive-through penalty for leaving the garage too early.