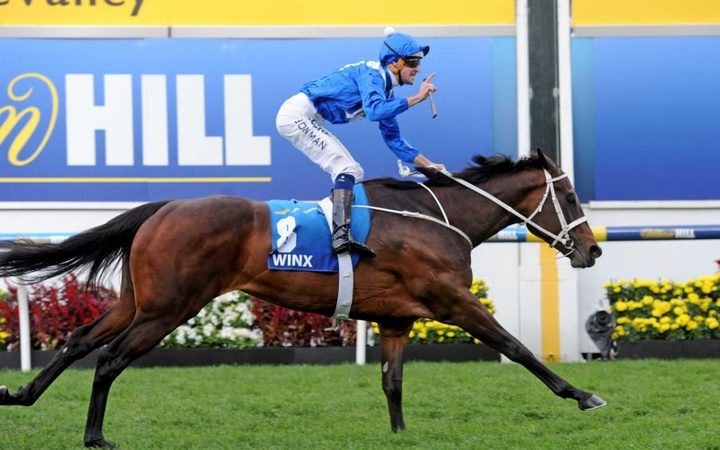 Trained by Sydney-based New Zealander Chris Waller, the seven-year-old mare has won the Queen Elizabeth Stakes in Sydney in her final start before retiring on Saturday.

The victory, in front of a record crowd of more than 40,000 at the Randwick course, was a record 33rd straight win.

Starting from an outside barrier, Winx got a solid jump and settled perfectly just behind the mid-point of the field before unleashing one final trademark storm home to win by more than a length.

As well as finishes her career with 33 consecutive wins, Winx bows out with 25 Group One triumphs.

Jockey Hugh Bowman was emotional as he reflected immediately after the race.

"[I'm] so proud to be a part of it. It has been very real for me all day, with the amount of people here, it is just amazing," he told the Seven Network.

"Everyone watching around the world … America, Europe, Africa, all over Australia.

"This horse has captured the hearts of a lot of people around the globe.

"There is really nothing more for me to say. I mean, she just showed you what she is capable of doing.

"Maybe we will never know how good she really is."

The result also marked a milestone for Waller, who recorded his 100th Group One win as a trainer.