After eight races, Holden has finally produced a Supercars race winner, with Shane van Gisbergen triumphing at Symmons Plains to kickstart his season. 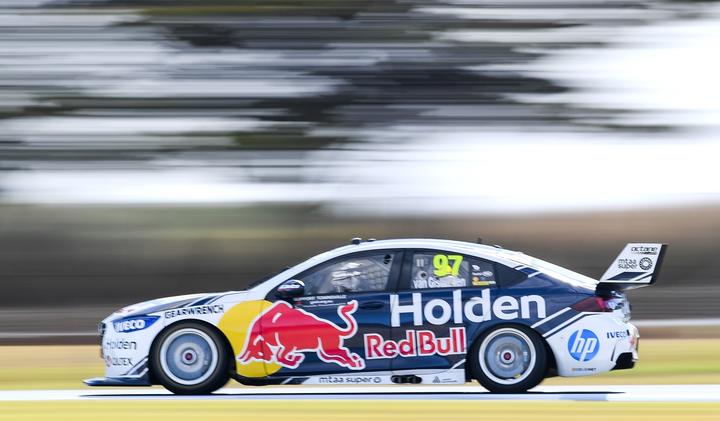 The Kiwi won from pole position on Sunday, beating home Fabian Coulthard and David Reynolds on a grey day in Tasmania.

While the clouds and drizzle made for miserable conditions, there were finally smiles in the Red Bull Holden Racing Team garage.

Never before has the sport's dominant team had to wait so long in the season for a race win, and hopes will now be high they can begin to make inroads to Scott McLaughin's commanding championship lead.

McLaughlin finished fourth on Sunday, the first time he's started a race this season and not won it.

The Kiwi's lead at the top of the standings is now 124 points to teammate and compatriot Coulthard, who took second place in both races during a productive meet.

But together with Jamie Whincup's run through the field to finish fifth, Red Bull and van Gisbergen could look back on a super Sunday result that didn't come easily.

"What an awesome race, I had a big battle with Fabian and Scott out of the pits.

"We've bounced back from our shocker last time ... once our tyre life was good I knew we were going to be okay."

Whincup jumped off the canvas on Sunday, putting aside his last place on Saturday, rallying strongly from a grid position of 13th.

In a tactical race, a breakaway of the top five finishers and drought-breaking Saturday pole-winner Mark Winterbottom duelled for control of the race.

Highlights were a bumper-to-bumper and door-to-door lap between van Gisbergen and McLaughlin, and a red-hot duel between Coulthard and Reynolds.

Reynolds was disappointed not to nab Coulthard but at least bagged a first podium of his year.

Threatening clouds meant teams had wet-weather tyres on standby, but the intermittent rain proved manageable for teams on slicks.

"We gave it our best shot," Coulthard said.

"I'm rapt for my guys. We had a lot going on during the week and they did a great job."