The "impossible" quadruple dream remains intact for Manchester City after an early headed goal from Gabriel Jesus sealed a scrappy 1-0 win over Brighton & Hove Albion on Saturday to put them into the FA Cup final. 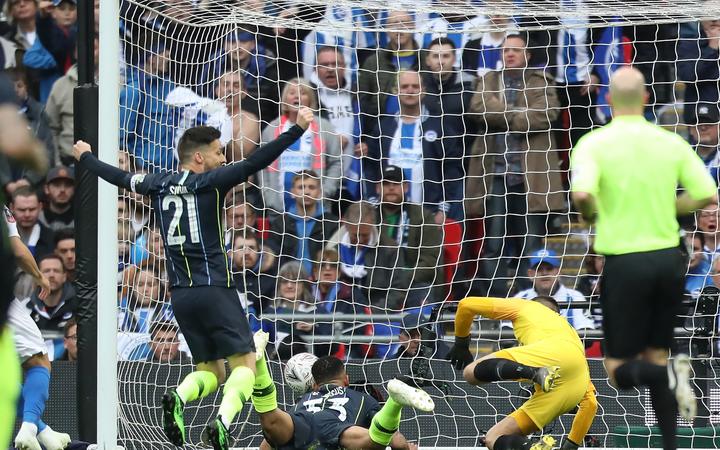 Jesus launched himself into the air to connect decisively in the third minute but City never hit top gear and they rather laboured to victory in an instantly forgettable match.

Nevertheless, after bagging the League Cup, being locked in a titanic battle with Liverpool for the Premier League title and in the Champions League quarter-finals, Pep Guardiola's side remain on course for an unprecedented clean sweep.

It was a tired-looking display against Premier League relegation battlers Brighton, though, and City will need to rediscover their spark ahead of Tuesday's trip to Tottenham Hotspur in the first leg of their Champions League last-eight tie.

Guardiola was quick to play down the chances of the quadruple.

"My opinion is that nobody has done it, so why can we do it?" he said.

City will face the winners of Watford and Wolverhampton Wanderers who meet in the second semi-final.

In Premier League matches, Burnley made a big step towards securing survival after coming back from a goal down to beat Bournemouth 3-1 away as their striker Ashley Barnes scored at both ends in an action-packed contest on Saturday.

The home side took a fourth-minute lead after Barnes headed into his own net but Burnley came roaring back as New Zealander Chris Wood levelled with an 18th-minute header before Ashley Westwood swept in a shot from 13 metres barely two minutes later.

Callum Wilson missed a gilt-edged chance to equalise midway through the first half when he headed over the bar from close range before Barnes scored at the right end in the 57th minute.

It was a fourth win in a row for manager Brendan Rodgers who took charge of Leicester in February as Huddersfield missed the chance to move off the bottom of the standings for the first time since December.

Leicester's Youri Tielemans opened the scoring with a long-range strike following a corner in the 24th minute.

Vardy doubled the lead three minutes after the break before midfielder Aaron Mooy converted a penalty for Huddersfield after Caglar Soyuncu brought down Karlan Grant.

James Maddison restored Leicester's two-goal advantage with a free kick in the 79th minute, then Vardy sealed victory with a penalty.

Crystal Palace all but banished any lingering relegation fears as captain Luka Milivojevic fired home a late penalty to secure a 1-0 Premier League victory at Newcastle.

Newcastle were guilty of squandering too many chances and were punished when DeAndre Yedlin fouled Wilfried Zaha in the box in the 80th minute and spot-kick expert Milivojevic did the rest, beating keeper Martin Dubravka.