She is the first woman to referee NZ's premiere kickboxing show 'King in the Ring', now Victoria Nansen aims to lead Muay Thai to the Olympic Games. 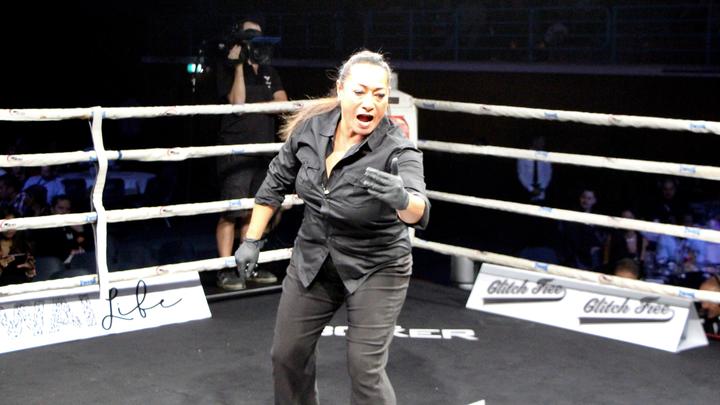 You can't step into a ring, put on the black rubber gloves and referee a kickboxing match without earning your stripes - but Victoria Nansen sure has.

On Saturday night's 92kg 8-man eliminator King in the Ring event, the former multiple world kickboxing champion became the first female to feature on the card as a referee, a feat that adds to her long history of involvement in the sport.

"Not very many promoters would be open to it, it's a big statement for gender equality," says Nansen

"I was so nervous but I loved it. I hope it starts the ball rolling because I pride myself in the fact that those boys respect me - that's what I add."

For the 'Fight Mother', combat sport is in her DNA.

Raised with a Kungfu artist for a father, a professional boxer for an uncle, and alongside two prominent fighting siblings this life was always inevitable.

For Nansen though it's more than a fortunate inheritance.

While biologically predisposed to becoming a natural it wasn't the way she learned the true art of combat, it was the internal battle during childhood that had her searching desperately for her 'light'.

At the age of six years old a young Nansen was exposed to sexual abuse sending an innocent mind spiralling, her involvement in kickboxing from eight years old she describes as an "unhealthy" one.

"I'm well and truly not broken because of the sport... fight sport digs deep into your soul and if it's an angry or hurt soul martial arts will be the healing factor," says Nansen

She compares her journey to a Hollywood cliché of adversity. It took a decade engulfed in the sport with counselling to heal before finally coming to realise her calling.

But not all story lines start with world titles, or even follow on to a career dedicated to helping others find their light too, nor do they end in becoming a humble matriarch of the sport.

"Time heals everything and I've been in love with my sport since day dot," she says

"I have always coached and fought and being a woman has never been an issue. I've been trained, coached and have fought males during my career however it's good to see women giving it a go - I wish we had more while I was fighting."

"I knew a long time ago I was going be a fight mother, so I didn't push for a fighting career, I know this is what makes me and it's needed." 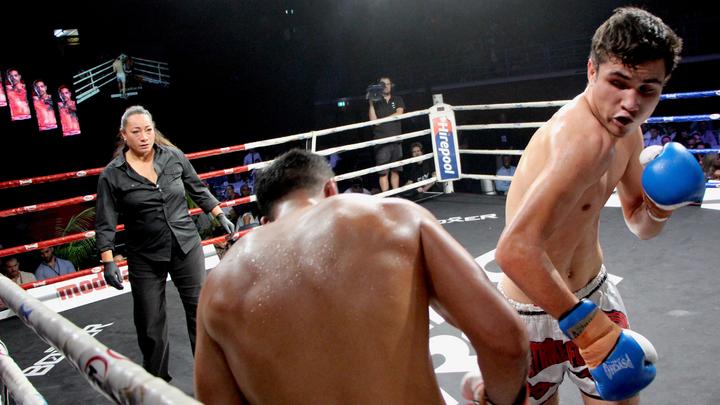 Originally fighting out of Balmoral Lee Gar, the 42-year-old went on to claim multiple titles under the WMC (World Muaythai Council), a silver medallist at the IFMA world championships and a blackbelt in Siu Lum Gar kungfu.

Nansen though became a loyal servant to Muay Thai kickboxing, a kickboxing art all on its own derived from Thailand.

The accolades earned her a position as the President of the WMC for New Zealand providing opportunity to become a founder of the New Zealand Muay Thai competitive team - the Black Gloves.

Better known as "Lady Smac", Nansen never lost her passion for the mats working at kickboxing's Smac Gym in Manurewa for over 15 years as a fighter, then coach and manager.

While teaching countless students, special projects were put in place with community groups such as TYLA (Turn Your Life Around) an organisation focussed on at-risk youth, CYFs (Child, Youth and Family) children as well as those with disabilities.

Nansen has since "hung up the gloves" and moved away from south Auckland to follow love and family to Featherston opening a second gym where her mission continues.

"I work with people who suffer from mental illness, the blind, those with down syndrome, bipolar, one student (four years old) I have with a rare lung disease but it's really important to give back," says Nansen

"I'm not one of those fighters who holds on to their legacy, I build the blocks for the next generation of fighters to come through - the next Lady Smac and the next lot of us."

"It's history we're making, even before me fighters had it hard and now it's paying off. Our new generation are getting the goods we could only dream of but that's the whole idea."

Her work in competitive combat sport, she says, isn't done yet.

Nansen has global hopes of leading the Black Gloves to the 2022 Youth Olympics in Africa and then onto an official Olympic Games event, albeit the sports inclusion as a competitive event not an exhibition as it stands at the moment.

"I will be back to select and lead this team in the near future," says Nansen

"The overall vision is that I want to finish my job by taking a Muay Thai kickboxing team to their first Olympics and at the moment that's what we are working toward."

"It's all learning for me, I don't want to sit still but instead stay motivated in the sport you know? After all fighting is a lifestyle."