Latest - Andy Maloney remains first and Josh Junior has improved to second in the Finn class after the latest day of racing at the Princess Sofia sailing regatta in Spain. 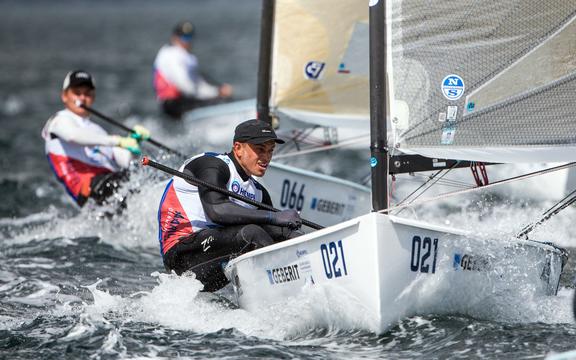 The women's 49er crew of Alex Maloney and Molly Meech have dropped from first to third and the Nacra 17 crew of Gemma Jones and Jason Saunders are fifth.

Paul Snow-Hansen and Dan Wilcox are sixth in the men's 470.

Logan Dunning Beck and Oscar Gunn are ninth in the 49er, while Olympic champions Peter Burling and Blair Tuke had a better today to improve to 13th.

Manchester City is back atop English football's Premier League.

The reigning champions have beaten relegation-threatened Cardiff 2-0 in Manchester to move one point above Liverpool, with six games remaining in the season.

And Chelsea's thumped Brighton and Hove Albion three-nil at Stamford Bridge to sit fifth, just a point behind Tottenham.

Only three teams remain unbeaten after two rounds of the National Club Cricket competition in Auckland.

Brazil football great Pele was hospitalised in Paris yesterday with a strong fever but his condition is not life-threatening.

The 78-year-old was admitted as a precaution after attending an event in the French capital with France's World Cup winning youngster Kylian Mbappe.

A representative for Pele in Brazil could not immediately be reached for comment.

Pele was still in hospital today.

South African Rugby has recorded a small post-tax profit of $208,000 in 2018 due to aggressive cost-cutting and an increase in revenue, reversing heavy losses from the previous two years.

SA Rugby managed to keep its expenses in line with projections, but enjoyed a 9.5 percent rise in revenue to $130 million on the back of broadcasting rights, sponsorships and Test match gate receipts.

It reverses losses of $1.6m in 2016 and 6.3 million dollars in 2017 and comes despite a net cost of $6m for entering the Cheetahs and Southern Kings into the PRO14 competition with teams from Wales, Ireland, Scotland and Italy.

The driver injured in the accident in Colombo was later discharged from hospital and Karunaratne was released on bail.

The batsman later produced himself in court and also apologised for his actions as SLC began its own inquiry into the incident.

No verdict on Policeman in charge at Hillsborough disaster

The jury in the trial of Hillsborough match commander David Duckenfield has been unable to reach a verdict.

Lawyers for Mr Duckenfield have said they will oppose an application from prosecutors for a retrial.

During the 10-week trial at Preston Crown Court, jurors heard that 96 men, women and children died as a result of a fatal crush on the Leppings Lane terrace on 15 April 1989.

The jury deliberated for more than 29 hours but was unable to agree whether Mr Duckenfield was guilty or not guilty of manslaughter by gross negligence.

Lock Kane Le'aupepe will get his first Super Rugby start for the Hurricanes in Friday night's game against the Highlanders in Dunedin.

The Bay of Plenty second rower, who came off the bench in last weekend's loss to the Crusaders, will partner James Blackwell in the second row.

Hooker Dane Coles is still unavailable because of a calf strain with Ricky Riccitelli again starting.

Jordie Barrett will play in his fourth position this season after being named at centre in place of Matt Proctor.