Re-signing with the Crusaders for two more years won't prevent Scott Robertson from potentially becoming the next coach of the All Blacks. 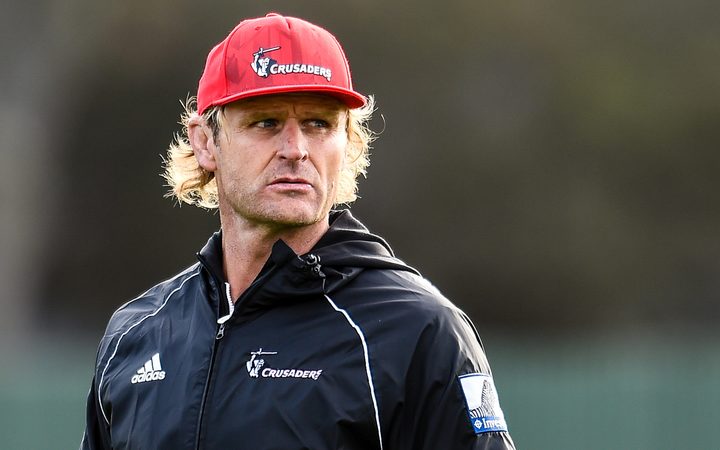 Robertson announced on Monday he had signed an extension to his contract with the Crusaders and New Zealand Rugby (NZR) for the 2020 and 2021 seasons.

There had been speculation that would put the former All Blacks flanker, who is chasing a third straight Super Rugby crown with the Crusaders this season, out of contention to replace Steve Hansen after he steps down at the completion of this year's World Cup.

Robertson said there was "no chat around" the All Blacks coaching situation in his contract negotiations, but reiterated it was still well and truly on his radar.

"You consider the All Black job when it comes up because it doesn't come up that often."

Under NZR policy coaches aren't able to coach the All Blacks and a Super Rugby side at the same time.

That means the potential departure of Robertson to the All Blacks at the end of this year would leave the Crusaders looking for a new head coach.

Crusaders chief executive Colin Mansbridge said they would welcome a promotion for Robertson to the top coaching job in New Zealand rugby.

"We are a development focussed organisation. Would I want this guy to be All Blacks coach? Absolutely, it would be fantastic problem to have and we would embrace that challenge.

"Would it leave a few challenges for us? No doubt about it, but one of things Razor (Robertson) been very helpful with from what I can see is how much process, structure and IP he's added on to what was already at the organisation.

"We've done some thinking about it but frankly, to respect this group, the best thing we can do is focus on 2019."

The rapid rise in Robertson's stocks meant there had been interest from offshore for his services.

The 44-year-old confirmed he considered the interest, some of it rather lucrative, before ultimately deciding to stay.

"It was a really thorough process, but when it came down to it, it was quite clear for my wife and family that we wanted to stay.

"I only got the currency converter out once to have look at the options overseas and just to weigh it all up, but in essence this was the best thing for me.

"The opportunity to head away will be there in future. What we've done here and achieved is something I'm really proud of and will continue to add to. To be part of a great organisation is pretty special.

"It's always flattering to get offers, but my mindset is here, to get these boys better and achieve something special."