With the 2019 Super Rugby season officially kicking off tonight between the Highlanders and Chiefs in Hamilton, RNZ Sport answers the burning questions that will dominate the headlines this year.

Which is the team to beat in the 2019 Super Rugby season?

This is their title to lose. Back to back champs looking to do something special and win three straight. Coach Scott Robertson one of the best in the business. Crusaders have an All Black-laden team and dominant forward pack with capable and classy backs. I don't think anyone else will come close.

Bridget Tunnicliffe: You can't really go past the Crusaders.

They've got the personnel, they've got the depth, they've got Scott Robertson, who's really got them humming. But it's sport of course so anything can happen. The Crusaders missed the playoffs in 2015 after making the final the year before, so the unexpected can happen. 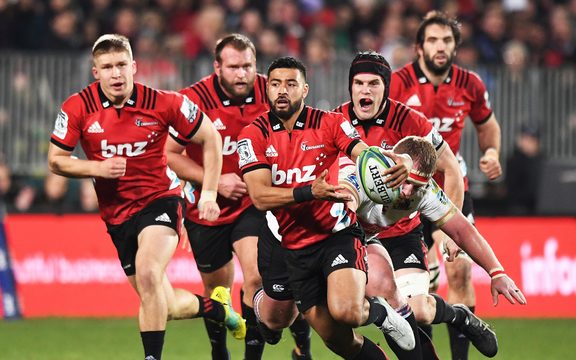 The RNZ Sport team is predicting the Crusaders to go three from three in 2019. Photo: PHOTOSPORT

Jamie Wall: Of course it's the Crusaders from an on-field point of view, but I want to say the Lions simply for the sake of the competition.

We've had them in the final for three years in a row now and they've got progressively worse, so they need to be beaten to keep them out. Super Rugby needs a blockbuster final between two competitive teams.

Hamish Bidwell: The Crusaders - their talent and pedigree dictates that the 2019 title is their's to lose.

Few teams, in any league or sport around the world, have ever boasted a better winning mentality than the Crusaders. Year after year, their ability to prevail when it matters is truly remarkable. Age and the Rugby World Cup have the potential to hamper hopes of three successive titles, which is where coach Scott Robertson comes in. History shows that players play for him and, if he can coax another win out of them this year, then he'll surely be the next All Blacks coach.

Which team will finish last in the New Zealand Super Rugby conference?

Joe: A much harder question to answer.

History would suggest the Blues, but the buzz in the big smoke has even got to me, could it be their year? (Not to win of course lol, no way they beat the Saders), but they should make the playoffs for the first time since 2011. My guess is the Highlanders and Chiefs will battle it out for last in NZ. The Highlanders have a history of winning with no-names, but without a first class first five and a less than imposing tight five, I think they come last. 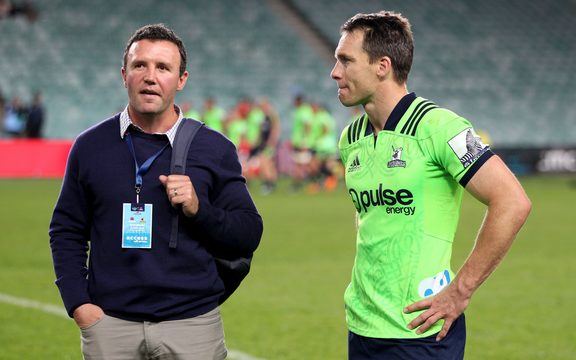 There isn't a lot of love for Aaron Mauger and his Highlanders from the RNZ Sport team this season. Photo: PHOTOSPORT

While they have a habit of defying expectations, having lost Lima Sopoaga they might struggle. Also, with the Blues looking like they will be stronger this year, the Highlanders might find themselves at the bottom of the table.

Simply because they don't have the depth to sustain a campaign that could see them have their best players yanked at any moment. Any All Black that even stubs their toe will be put on ice, so it's up to their wider squad to fill the gaps and that's where the southern men are looking thin.

Hamish: It's between the Blues and Highlanders.

The Crusaders are the benchmark, the Hurricanes have talent and a new coach with a lot to prove, while the Chiefs always exceed their potential on paper. The Highlanders, though, might battle to win games without Lima Sopoaga, and don't boast the best frontrow around, and the Blues' challenge is simply to justify their existence.

The Blues made a series of changes to the front office and coaching staff in the off season - will it make a difference in 2019?

Joe: Everyone hopes so, even non-Blues fans would like to see them back up the top again. They've had good pre-season results and new coach Leon MacDonald is singing all the right notes, though pre-season counts for little come crunch time. They have the basis of a good tight five, some exciting loose forwards and strong and speedy backs. The lack of a genuine world class first five could be their undoing, hopefully not. 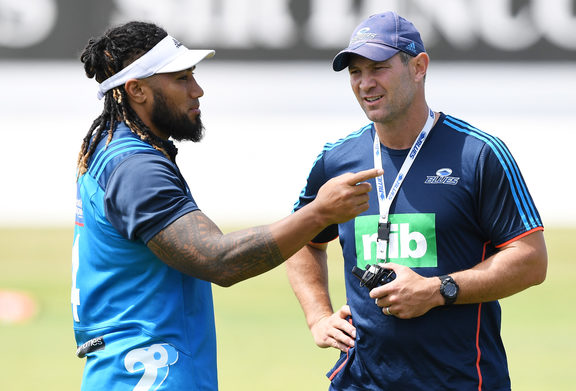 Can new Blues coach Leon MacDonald get the best out of his team this season? Photo: Photosport

Bridget: Leon MacDonald can only be a good thing for the Blues, as he's experienced being part of a successful Super Rugby franchise with the Crusaders. Tana Umaga wanted to run before he could crawl and was promoted to head coach too soon. But this could be the making of Umaga, to learn off the level-headed MacDonald. Side note: The film The Damned United is a great insight into how assistant coaches should not be underrated. In real life, controversial football manager Brian Clough would admit that without Peter Taylor, his trusted and brilliant deputy, he would not have had half the success.

Jamie: Yes because they can't get any worse than the embarrassment they were last season. Leon MacDonald will bring a bit more nous to a team that desperately needs something, anything to go their way after a veritable generation of underachieving.

Hamish: They won't hurt, but coaches and administrators can't catch-and-pass on the players' behalf. They can't win lineouts, make good decisions on defence or run a game from first five-eighth. The Blues have been an utter embarrassment for so long that improvement won't be difficult. It's then a question of whether a bit of positivity and momentum can't translate into a campaign of actual substance.

How will Ma'a Nonu go at the Blues and is he a possible bolter for the 2019 Rugby World Cup?

Joe: History would suggest he'll be a disruptive force, with Nonu being a 'cancer' in the previous Super Rugby teams he's played for. The last time he was in NZ, he played well for the All Blacks, but was decidedly disinterested in Super Rugby. The last time he was at the Blues he was an unwelcome disruption to a team struggling to implement the right culture. Hopefully the noises out of the Blues are true and he's returned to NZ with a better attitude and a desire to lead. All Blacks? He's getting on, but class is forever and the ABs midfield is slightly shaky with SBW and Ryan Crotty injury prone. 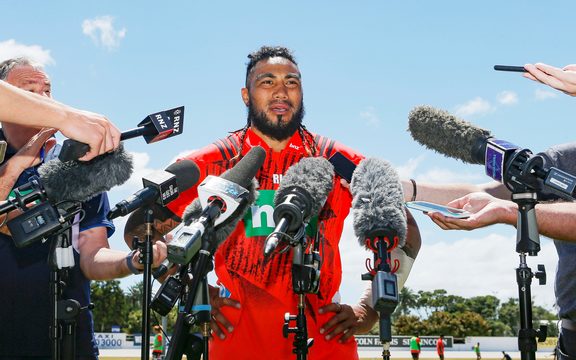 Ma'a Nonu has attracted a lot of attention since returning to New Zealand. Photo: Photosport

Bridget: The top 14 in France and the European Champions Cup are no walk in the park and Nonu will still be well conditioned. He should go well for the Blues and be hungry for success. Returning to the All Blacks after last playing for them in 2015 though might be a stretch for the 36-year-old but it would make a great story. On the other hand if he were to make the All Blacks, would that mean we don't have as much depth in New Zealand as we would like?

Jamie: He'll be a success. He wouldn't have come back unless his heart was in it, and by the looks of things is still in the same shape as when he left. If he does make the All Blacks, though, it will mean someone else will have to suffer a pretty serious injury.

Hamish: New Zealand rugby would hardly be in rude health if Ma'a Nonu was recalled to the All Blacks. The man's been in semi-retirement for three years, so let's just hope he can string some good football together for the Blues and help bring on emerging talents such as TJ Faiane. On a broader note, the rolling out of Nonu, Stephen Donald, Quade Cooper, Karmichael Hunt and Adam Ashley-Cooper represents a slightly worrying trend for Super Rugby.

How will the overseas Super Rugby conferences play out?

Joe: You'd think the Aussie teams will be better this year, but who knows if that rabble will sort itself out. The Aussie players though should lift, with a woeful Wallabies side surely full of openings ahead of the World Cup. The Lions in South Africa will be solid, as per usual, but they don't benefit from the farcical conference system. Last year they avoided most NZ teams and played the poor South African sides twice to seal an undeserved final appearance. This year the play Crusaders, and Chiefs in New Zealand and host the Hurricanes and Highlanders in Johannesburg. I don't think any of the SA sides can match the kiwi teams on their day. Crusaders should qualify top of it all. 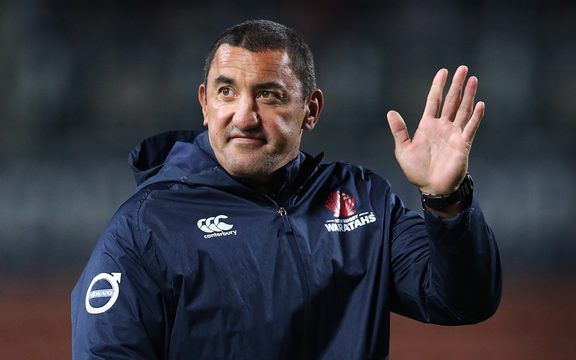 Former All Black Daryl Gibson is expected to do good things with his Waratahs side this season. Photo: Photosport

Bridget: The Australian Conference - I haven't got any real reason to think the Sunwolves won't struggle again. The Rebels, runners up in the Conference last year might do well. They've had an impressive recruitment drive and it will be interesting to see if Quade Cooper can light a spark. The South African conference - the Lions are organised, they're disciplined, and while they've lost some key players, there's still a strong core of Springboks talent on the list.

Jamie: Hard to see the Waratahs not taking out the Australian Conference again, but the Rebels may pull some surprises with their talent-laden backline. In the South African Conference it'll be Los Jaguares, and probably by a decent margin as the South African teams cope with the ongoing gutting of their talent. The Stormers admittedly have a pretty friendly draw, so they may play a role at the business end of the season.

Hamish: That no-one in New Zealand will give a hoot how any of those teams are going. I'll admit to having a soft spot for the Sunwolves and Jaguares, and to hoping they do well, but don't pretend to know or care about the others.