Opinion - So it's safe to say the equation for producing the most elusive of all phenomena in New Zealand sport was solved after last night: If you want atmosphere in the crowd, make sure most of the crowd are there to support the other team. 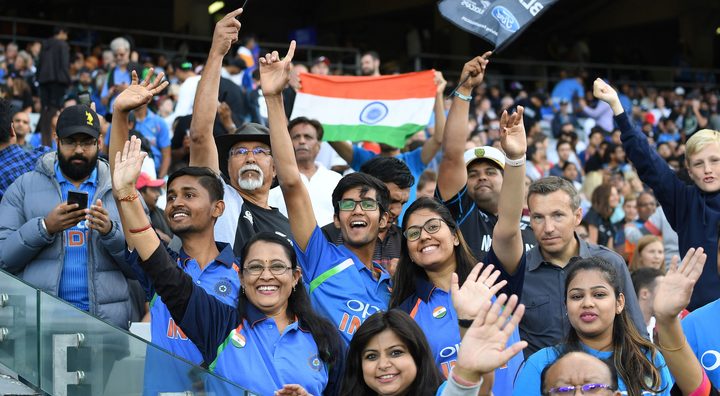 There were around 37,000 cricket fans in at Eden Park last night.

It seemed like nine out of every 10 were willing India on to beat the Black Caps. Despite the fact their team comfortably did just that, it made for an exceptionally noisy, good-natured time.

Indian cricket fans, much like their Tongan rugby league counterparts, completely took over what was supposed to be a home game for the Black Caps. The orange, white and green flags dominated the stands and waved furiously whenever there was a boundary, wicket or even when the score was being announced - because more often than not it was an indication of their team's winning position.

A father and son drum combo positioned next to the media box made sure a continuous stream of beats drowned out the music coming out of the tinny Eden Park speakers.

Which was good, because whoever was in control of the music seemed to want to play Neil Diamond and The Killers instead of something that would suit the overwhelming demographic of the crowd.

The biggest cheer of the night came just as the clock struck 10 and Mahendra Singh Dhoni strode to the crease. The 37-year-old, who has played 90 tests and an incredible 338 one-day internationals, is utterly beloved by his fanbase and they made their feelings well known as he did his trademark helmetless batting display - presumably so we could all enjoy his rugged good looks.

It all contributed to a Black Caps' hiding. Had it not been for a half century by Colin de Grandhomme, the damage would have been far worse, with a bowling display that rarely threatened the Indian batsmen.

By the closing stages, Rishabh Pant was showing Tim Southee such contempt he hit him for a one-handed six over midwicket.

But the White Ferns got a win

At least the White Ferns managed to come out of their match with an exciting win off the last ball of their innings.

The double header format has been warmly received by the players, with top scorer Suzie Bates saying the chance to mix with the men's sides was highly beneficial.

She couldn't hide her disappointment at the fact that she hadn't quite managed to see out the victory with her knock of 62, but was full of praise for Hannah Rowe and Leigh Kasperek for holding their nerve to get the Ferns home in the final over.

There were around 7000 in for the final stages of the women's game, which is pretty good considering it started at 3pm on a workday. Again though, the Indian contingent of fans made it sound like there were an awful lot more.

For the Black Caps though, it's a quick turnaround to try and win a series now locked at one-all.

It had better be reasonably dramatic, because this was a one-sided match that would be completely forgettable from a New Zealand perspective if not for the Indian fans.