The Breakers have been beaten 114-107 by Adelaide in their last Auckland home game of the Australian National Basketball League season.

The 36ers guard Nathan Sobey exposed a porous Breakers defence as the visitors closed in on a semi-final place. 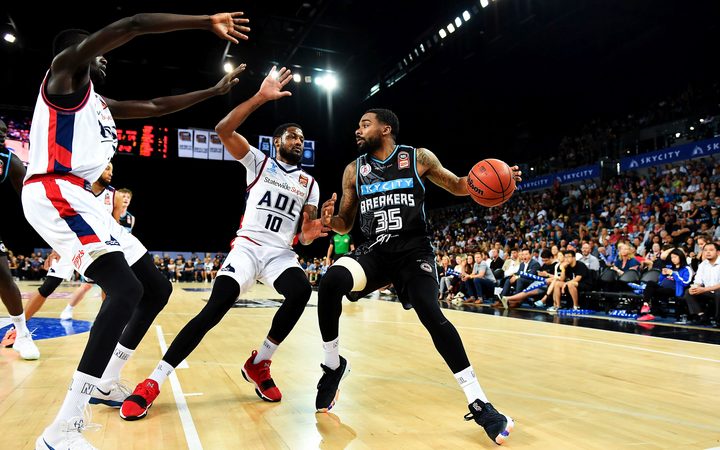 Sobey tallied a season-high 27 points and dished out nine assists.

His speed and control proved too much for the home side, whose miniscule play- off hopes are now over, despite more heroics from American centre Shawn Long.

In possibly his last game at Spark Arena, NBA prospect Long mixed 28 points and 12 rebounds in another virtual one-man show for the Kiwi side.

However, he couldn't plug the defensive woes that have plagued the seventh- placed Breakers, who have leaked more than 100 points in seven of their last eight games.

Fourth-placed Adelaide's offence is among the best in the league and they had no problem racking up at least 26 points per quarter to improve their record to 14-12.

The 36ers close out the regular season with tough games against Melbourne and Perth.

Last year's beaten finalists will fancy their chances given the undeniable influence of Boomers livewire Sobey, who welcomed the return from a calf injury of small forward Ramone Moore.

The American contributed 18 points from the bench, slotting into an offence that flowed from the outset.

"But we've got to do a better job down the other end of getting stops and trying to put teams away," Sobey said.

"Every game is big for us if we're going to make it. We just have to keep this momentum and then anything can happen from there."

Adelaide starters Daniel Johnson (19) and Demitrius Conger (15) also found ways to the basket as they levelled their season series with the Breakers 2-2.

Patrick Richard sunk six three-pointers in his 24 points for New Zealand while captain Tom Abercrombie managed 11 in his 300th game.

"In the second half we came out with some fight but they'd got going already, our defence was horrible," he said.

"It's been a frustrating year but you've got to take it on the chin and learn from it."

The Breakers have 3 games left including one in Wellington.