Winger Blair Kinghorn scored a hat-trick of tries as Scotland got their Six Nations campaign off to a winning start with a 33-20 victory over Italy at Murrayfield. 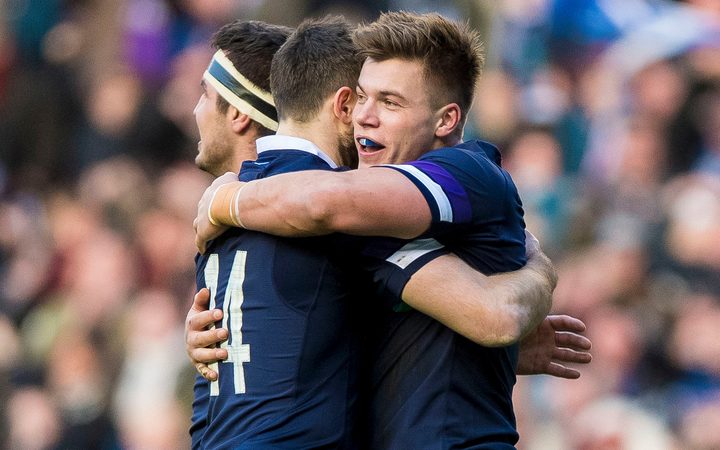 Scotland scored five tries to three for Italy for a deserved win, headlined by Kinghorn's three scores but inspired by first-five Finn Russell's clever touches, both out of the hand and with the boot.

But Scotland will be concerned after letting a 31-3 lead slip in the final 10 minutes after Simon Berghan was yellow carded and Italy took advantage of the one-man advantage to score through Guglielmo Palazzani, Edoardo Padovani and Angelo Esposito to give some late gloss to their score.

Stuart Hogg got Scotland's third try, although television replays cast doubt on its veracity, and substitute Chris Harris went over for their fifth.

Italy opened the scoring from Tommaso Allan's penalty but Scotland led 12-3 at halftime, going on to open up a 28-point lead before allowing Italy to come back late on a clear but icy-cold afternoon.

Italy's ninth-minute penalty came after Ryan Wilson was penalised for a spear tackle on 35-year-old Italian captain Sergio Parisse, who broke Brian O'Driscoll's record of Six Nations caps with his 66th competition appearance, all of them as a starter.

Their 3-0 advantage lasted just three minutes before Scotland got their first score as Russell delivered an inch-perfect crossfield kick into the arms of Kinghorn, who had a simple sprint to the line.

The winger went over again 10 minutes later after captain Greig Laidlaw shifted the ball to the left after a turnover and it went through several hands before Kinghorn crossed over.

At the start of the second half, Russell stabbed through a clever grubber kick over the Italy line that Hogg chased and got a touch on, but there did not seem to be any downward pressure on the ball from the Scotland fullback.

Nevertheless referee Luke Pearce, on his test debut, awarded it, then referred it to the TMO and got a positive second opinion even though television replays continued to cast doubt.

A break from Jamie Ritchie and another subtle Russell offload helped Kinghorn complete his hat-trick in the 54th minute and eight minutes later there was another home try, this time for replacement Harris, with Russell again involved in the build-up.

Scotland lost focus and allowed Italy a sudden glimmer of hope after Berghan was sent to the sinbin for collapsing the ball.

Palazzani, who had to play from the kickoff after first-choice halfback Tito Tebaldi was hurt in the pre-match warmup, went over from close to the line, then Padavani burst through for the second and winger Esposito finished off the late rally with another breakaway try.

"We are happy with the middle part of the game but we have a couple of things to work on. I see that as a positive though," said Scotland captain Laidlaw right after the match.