Opinion - It's said that Beauden Barrett will grin uncontrollably when he's asked a question he's uncomfortable answering. Which made it tricky last night in the bowels of Twickenham to know if he was genuinely happy about slotting the first drop goal of his test career, as well as a clutch penalty that put the All Blacks into a one-point lead over England that was never relinquished. 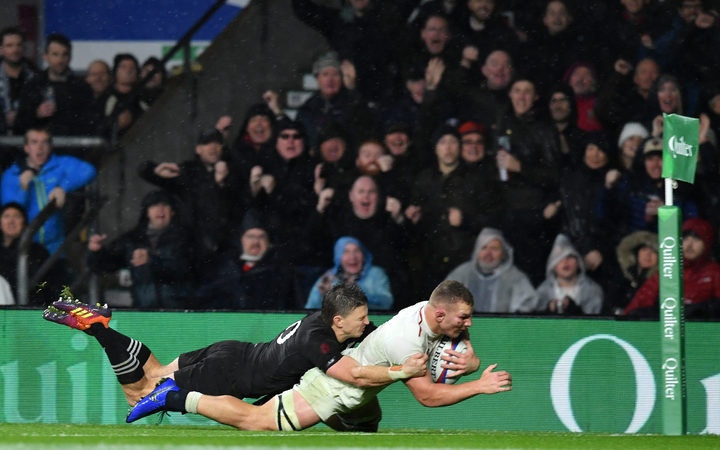 Barrett was probably feeling pretty good about it, though, and the grin was there from start to finish in the stand-up press conference. It'd be hard not to feel good given the discussion around his kicking boots and decision not to take a drop goal in the All Blacks' only loss in 2018.

It certainly looked like it was going to take an awful lot more than that after England's powerful opening 30 minutes. Twickenham is an incredible venue, with three decks of stands surrounding the field like a cauldron. The noise the crowd makes is deafening, whether they're singing Swing Low Sweet Chariot or simply roaring their approval at England making a line break or great tackle.

It was at fever pitch as England first broke the All Black line after only three minutes when Chris Ashton dived over in the corner. Then it reached the levels of the nearby Heathrow Airport when Dylan Hartley rumbled over with the help of around a dozen of his teammates from a perfectly executed lineout drive. The noise got so great that it literally drowned out the thunder rolling in due to the awful weather conditions.

But, it was late in the second half for when it really peaked for its utter zenith, and it was more a primal howl of indignation when Sam Underhill's remarkable effort was deemed no-try because of Courtney Lawes' offside charge down.

Yes, it was fair enough to be upset. But the call was 100 percent correct by TMO Marius Jonker; it's clear that Lawes was well in front of the hindmost foot of the ruck that saw him charge down TJ Perenara's attempted clearance. It probably won't help that both sides were guilty of being offside for basically the entire game, it seemed that in some patches the wingers were lining up in each other's backlines.

It's a pity for Underhill, because if the try had stood it would've gone down as one of the most memorable of all time. He went past Barrett with a delicate in and out, with the All Blacks' first-five readily admitting post match that he was impressed with the Englishman's pace and footwork.

The game was a flat out arm wrestle, with the opportunities few and far between as the game wore on. The All Blacks took theirs after essentially being denied the ball until half an hour into the game. England couldn't capitalise on the meagre territory given to them in the second half.

This, again, is why this tour is so important in the grand scheme of things. The last fortnight in Tokyo simulated what the day-to-day life of next year's World Cup, and now this game has done the same for a pressure game at the business end of the tournament. It's unlikely the All Blacks will face such a hostile and imposing crowd in Japan like they did at Twickenham, though.

But they did pass the test. The game was won by playing a very un-All Black game plan with lots of kicking, even though their sole try did come off the back of decision to turn down a shot at goal. They made their punches hurt, by the end England were just air-swinging.

Will Barrett be smiling next weekend, though? Ireland will pose a greater challenge, you'd think, given that they are the Six Nations champions. It's another massive test for this side on what is becoming a fascinating end of year tour.

* Jamie The Benchwarmer Wall grew up in Wellington and enjoyed a stunningly mediocre rugby career in which the sole highlight was a seat on the bench for his club's premier side. He's enjoyed far more success spouting his viewpoints on the game to anyone who'll care to listen.