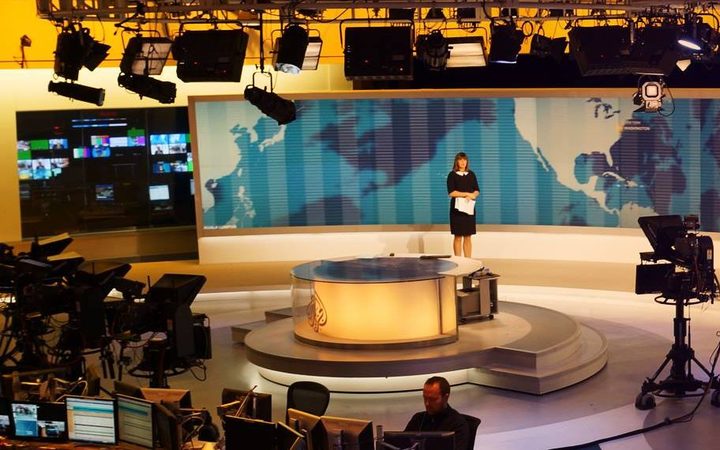 A studio in the Al Jazeera newsroom in Doha. Photo: Al Jazeera

The England and Australian cricket boards have dismissed claims their players are involved in spot-fixing cricket matches after al-Jazeera television network said it had uncovered corruption in international cricket. Here is what commentators are saying overseas.

Akhtar, one of the fastest bowlers the game has seen, was also often in trouble; in 2008 he was banned for criticising the Pakistan Cricket Board.

"Really heartbreaking news is coming out about Match fixing on ALJazeera news Doha many countries are involved in matches fixing which includes almost every country it's really sad to hear all of that .."

Really heartbreaking news is coming out about Match fixing on ALJazeera news Doha many countries are involved in matches fixing which includes almost every country it’s really sad to hear all of that ..

CEO, James Sutherland, says: "Cricket Australia takes a zero-tolerance approach against anyone trying to compromise the integrity of the game and to suggest anything otherwise is unsubstantiated and incorrect.

"Prior to the broadcast of Al Jazeera's documentary, Cricket Australia's Integrity Unit conducted a review of the latest claims by Al Jazeera, from a known criminal source, and, from the limited information provided by Al Jazeera, our team have not identified any issues of corruption by any current or former player, including in relation to Big Bash League matches."

Marks, a former Somerset and England cricketer who writes for The Guardian, says al-Jazeera needs to start naming names.

"The frustrations lie with the fact that Munawar (the alleged fixer) is clearly eager to impress his would-be client - al-Jazeera's undercover investigator, David Harrison - with the scope and range of his powers over the world's international cricketers. Moreover every time we seem to be getting to the nitty-gritty, the names of those claimed to be conniving with the spot-fixers are withheld. At some point the makers of such programmes have to put up or shut up."

The Guardian points out that Al-Jazeera's investigations team claim that in some of the matches both teams appear to have been delivering a fix. They also state that only one of the 26 scoring patterns allegedly predicted by Munawar did not come to pass and then by only one run.

Mark Wood, who did not play in the games cited by al Jazeera, dismissed the claims as "like the boy who cried wolf".

"Until Al Jazeera bring out anything concrete, where they name someone or show a piece of evidence, they keep saying there's this and that there, but never producing anyone or saying there's any evidence behind it. It's a bit like the boy who cried wolf, and until they say something I'm not going to believe what they say."

Brettig immediately tweeted links to a column he wrote about the need to sort out Indian betting as a way for cricket to start attacking match fixing.

"Illegal bookies throughout the Indian subcontinent, running informal operations for huge sums of money, all taking their odds from relatively few syndicate bosses with deep roots in the Indian crime underworld. Then as now, they are central to a massive, unregulated betting market that may be manipulated more or less at will, provided there are players on the take. This network was at the centre of the recent Al Jazeera investigation."

The former England captain turned sports commentator said the allegations had to be taken seriously.

"These are very serious allegations and everyone must take it seriously. We cannot have spectators coming to a game of cricket and thinking: 'Oh no, is this another one of those?' when something remarkable happens. Some people out there will say there is no smoke without fire and I think it is important for Al Jazeera to send [any evidence] to Interpol. It would be wrong to put it out there and say 'Over to you'."