A television documentary claiming one of the Black Caps rare test wins over Australia was tainted by match fixing are being dismissed as simply "unsubstianted allegations" by New Zealand Cricket.

An Al Jazeera television documentary claims it has tapes of people involved in fixing 15 matches, including the game between New Zealand and Australia at Hobart in 2011.

New Zealand won the game. It was their first Test win on Australian soil for 26 years.

But along with England and Australian cricket authorities New Zealand Cricket has rejected the allegations and urged the network to come forward with any information it has.

"We would, however, join the ICC and Cricket Australia in urging Al Jazeera to make all information relating to the allegations available, in the interests of natural justice and good journalism." 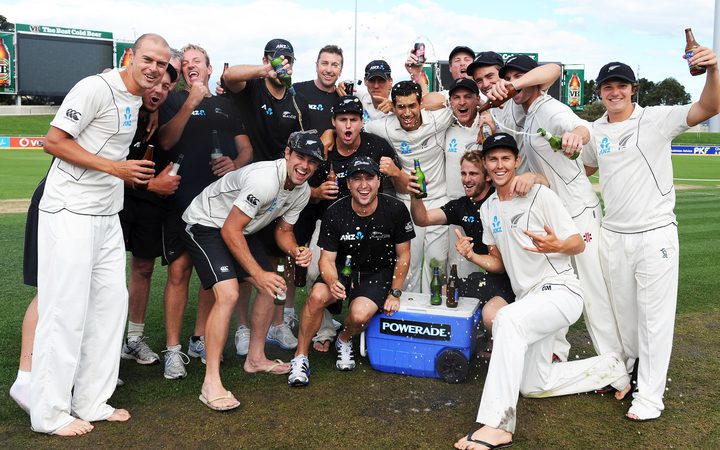 The Black Caps celebrate their win over Australia at Bellerive Oval in Hobart in December 2011. Photo: Photosport

Most of the games involve the England team, and the English Cricket Board has dismissed them.

The International Cricket Council said it was investigating the allegations but the broadcaster had not been co-operating with them.

Alex Marshall, the general manager of the ICC's anti-corruption unit, said the allegations contained in the documentary were already under investigation and his unit has made "repeated efforts" to engage with the broadcaster.

"The ICC is committed to working to uphold integrity in cricket. As you would expect we will again take the contents of the programme and any allegations it may make seriously and will investigate fully," Marshall said.

"However, I must refute the assertion that cricket does not take the issue of corruption seriously, we have more resources than ever before working to rid our sport of corruption."

The England and Wales Cricket Board also released a statement in the wake of the documentary's release.

"ECB takes its responsibilities on anti-corruption and preserving the integrity of cricket very seriously," the statement said.

"Whilst the limited information we have been given by Al Jazeera is poorly prepared and lacks clarity and corroboration it has been properly assessed.

"Analysis of this by the ECB integrity team has cast no doubt on the integrity or behaviour of any England player, current or former.

"The materials we have been given have been referred to the ICC's anti- corruption unit and we will continue to work with them, as is the correct procedure for protecting the game.

"We are also working closely with the PCA (Professional Cricketers' Association) and keeping them informed."

The chief executive of Cricket Australia James Sutherland said prior to the broadcast of Al Jazeera's documentary, Cricket Australia's Integrity Unit reviwed the claims "from a known criminal source, and, from the limited information provided by Al Jazeera, our team have not identified any issues of corruption by any current or former player, including in relation to Big Bash League matches," he said.

"We urge Al Jazeera to provide all un-edited materials and any other evidence to the ICC Anti-Corruption Unit."

Australian cricket is proactive with its sports integrity management and Cricket Australia's Integrity Unit oversees and maintains the integrity of all domestic cricket in Australia, including BBL and WBBL matches.

In addition to this, prior to the start of each Australian season, all professional cricketers are required to participate in thorough anti-corruption education sessions before being eligible to compete in CA's domestic competitions.

The chief executive of the Australian Cricketers Association Alistair Nicholson said "enough is enough when it comes to unsupported accusations which unfairly tarnish players reputations.

"The players are sick and tired of being subject to accusations, without the proper evidence to substantiate it."

The 15 matches in question are: