A ruthless Pakistan have put Australia to the sword in Abu Dhabi, exposing the tourists' shallow batting order and marching towards an imposing target in the second cricket Test.

Fakhar Zaman (66) and Azhar Ali (54 not out) both scored half-centuries to guide Pakistan to 144-2 at stumps on day two, leading Australia in their second innings by 281 runs. 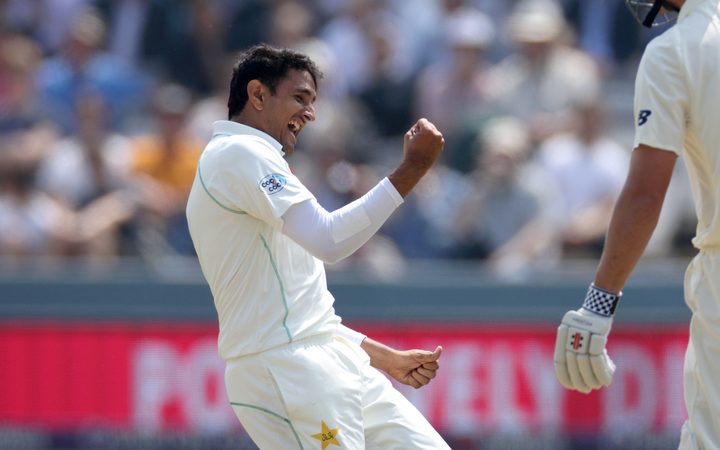 Tim Paine's men were earlier bowled out for just 145, severely diminishing any hopes of winning their first Test series in Asia since 2011.

Lyon's stunning caught-and-bowled dismissal of Fakhar was the sole highlight in a grim final session for the visitors.

The offspinner almost had his head taken off by a shot which Fakhar blasted back at him but managed to get a hand up and take a remarkable reflex grab.

It was otherwise tough going for Australia who also appear to have concerns about the fitness of Mitchell Starc.

The pace spearhead, who battled debilitating cramps during the drawn first Test in Dubai, bowled just four overs on Wednesday and later spent time fielding in the slips cordon.

Left-arm spinner Jon Holland again battled after a wicketless first innings and was denied the wicket of Azhar in the second-last over by the DRS.

Paine reviewed the not-out decision for lbw and replays showed the ball was hitting the stumps but Azhar was too far down the pitch to overturn the umpire's call.

Australia's hopes of salvaging a Test hurtling towards an early finish crumbled when Marnus Labuschagne (25) was run out in freakish circumstances after lunch.

The rookie was at the non-striker's end when Starc hit a hard return shot to legspinner Yasir Shah which clattered into the stumps.

Replays showed Yasir had got a finger to the ball and Labuschagne had failed to ground his bat.

Starc hit two sixes on the way to 34 and was the last man to fall, trapped lbw by seamer Mohammad Abbas who continued his superb series to finish with 5-33.

Marsh nicked an Abbas ball to Haris Sohail in the slips on three to continue a lean run which now extends to 11 innings.

Aaron Finch fought a lone hand in just his second Test before falling for 39 with none of Head, Mitch Marsh or Paine able to go the distance.

Australia's batsmen suffered collapses of 10-60 and 3-0 in the drawn first Test in Dubai, and the latest flop had an all-too-familiar feel about it.

This one will feel especially frustrating after Nathan Lyon snared four wickets in six balls on day one to hand his side a dream start.