Opinion - So now you can get penalised for tackling a player around the waist? 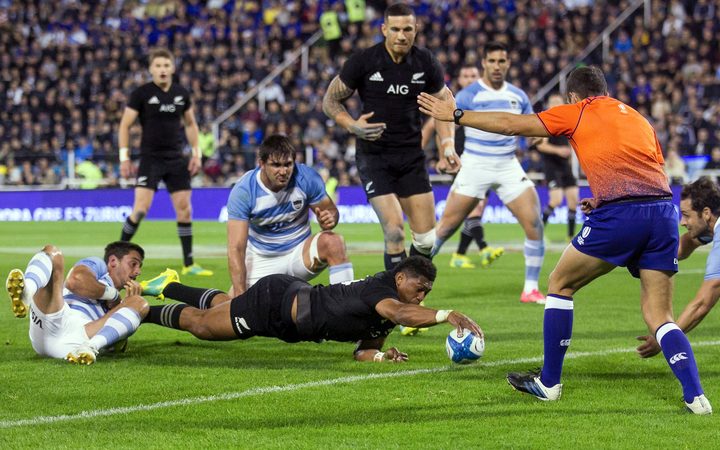 It's always a bit strange having a whinge about the ref after a game when the right team won, and the decisions made didn't really affect the narrative of the game at all. But some of the calls in the All Blacks' 35-17 win over the Pumas in Buenos Aires this morning deserve a decent amount of scrutiny, because they were downright baffling.

Let's start with the most contentious. Not long after the start of the second half, Pumas first five Nicolas Sanchez made a clean break into the All Black 22, which was about the first time the visitors' defensive line had been breached all game. Ryan Crotty and Beauden Barrett came across in cover and flattened Sanchez, causing him to lose the ball backwards.

In real time, it looked as though Barrett had laid Sanchez out with a huge shoulder charge. That in itself would be strange, as Barrett has no pedigree as a hit merchant. The replay confirmed as much, Crotty had done the real damage by stopping Sanchez in his tracks and allowing Barrett a free hit at his midsection, which he did by wrapping his arm around and tossing the Argentine to the ground.

At first it seemed French referee Mathieu Raynal had a pretty good view of it and let play continue, but after the ensuing knock on he wanted another look. Fair enough, too. But then he penalised Barrett for not wrapping his arm and leading with the shoulder.

I'm sorry, but that is a dead set joke.

Barrett's arm was clearly across Sanchez's waistline, and to get penalised for that sets an absurd precedent. While there are more than legitimate concerns about player safety in the tackle area, and the irony of the concussion prone Crotty being involved wouldn't have been lost on many, to say this was illegal after having a look at the replay was ludicrous.

But the officials weren't done making fans scratch their heads. The Pumas got their first try just before the hour mark, by replacement halfback Tomas Cubelli burrowing over after the ball came off the back of an attacking lineout. This time Television Match Official (TMO) David Grashoff got involved again, but he and Raynal obviously disagreed on whether it was a double movement (it certainly looked like one, meaning Grashoff was probably right).

But Raynal awarded the try, which begs the question as to why the TMO even needed to be at the game in the first place. If the ref truly is the one in charge, then all the TMO is doing is just queuing up replays for him to watch on the big screen. You don't need to be a referee to do that, you need to be part of the TV crew - who are basically doing that job for the TMO anyway.

It's not cheap to send someone all that way to Buenos Aires just to not get listened to, so why don't World Rugby just cut the middleman out and just let the refs make their decisions - good or bad - by watching them themselves?

And let's not even start on the shocking non-call on a late hit Barrett collected in the second half.

here's the late shot on Barrett that wasn't even referred to the TMO #ARGvNZL pic.twitter.com/akvReRCJTN

The All Blacks themselves will no doubt have no opinion on these. They don't even comment on refereeing decisions that cost them series victories, so don't expect anything out of them in a game they handsomely won. But someone should probably bring these up with World Rugby before it happens in a more meaningful game.