New Zealand won their third straight Rugby Championship title after two tries from winger Rieko Ioane helped them to a 35-17 victory over Argentina in Velez Sarsfield in Buenos Aires. 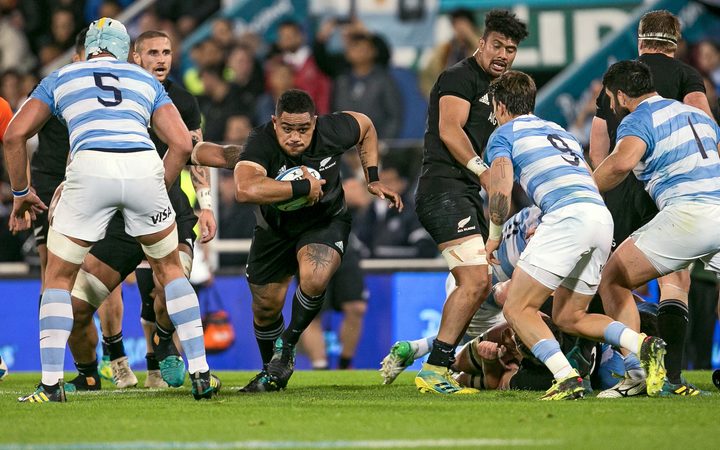 The bonus-point win clinched the title -- a 16th in the various versions of the southern hemisphere championship -- with a game to spare for the world champions in what was a scrappy but well-deserved victory.

New Zealand, looking to bounce back after a home loss to South Africa two weeks ago, went behind to a Nicolas Sanchez penalty after just five minutes but after Ioane had put the visitors ahead two minutes later they never looked back.

Waisake Naholo went over in 16 minutes, Ioane scored the All Blacks' third 11 minutes before half time and Beauden Barrett put away all three conversions as Argentina's handling errors contributed to a 21-3 deficit at the break.

Sonny Bill Williams was given a yellow card four minutes before half-time but the home side could not take advantage and replacement Patrick Tuipulotu added a fourth New Zealand try, converted again by Barrett, after 54 minutes.

That sparked a mini-revival by the home side as first halfback Tomas Cubelli and then Emiliano Boffelli scored tries, both of which were converted by Sanchez, who had a poor night by his standards, missing one easy penalty early in the first half.

New Zealand got a fifth try when Anton Lienert-Brown chased down a kick with eight minutes left.

The bonus point win gave the All Blacks 21 points, seven more than South Africa, who beat Australia 23-12 in Port Elizabeth earlier on Saturday.

It also extended New Zealand's unbeaten run against the Pumas to 28 games.

Coach Steve Hansen was pleased with his team's improvement after last week's 34-36 upset loss to the Springboks.

"Parts of it were messy, but there were other parts that were really good," he told Sky Sport afterwards.

"You've got to give a wee bit of credit to Argentina - they're a very difficult side to play against, particularly here."

The All Blacks ran a new-look forward pack, with Brodie Retallick, skipper Kieran Read, Liam Squire and Joe Moody either injured or resting, and Hansen was forced into a late change when No.8 Luke Whitelock fell ill.

However, he was more than happy with the way replacement Ardie Savea stood up.

"I thought our scrum was outstanding tonight - he controlled the ball at the back, and won us a lot of penalties because of that control," Hansen said.

"He showed a lot of pace off the back of the scrum too, and his play around the park was good."