Europe have produced a barnstorming comeback on day one of the Ryder Cup - sweeping the foursomes in devastating style to take an overnight 5-3 lead and leave the United States dazed and bewildered after they had won the fourballs 3-1. 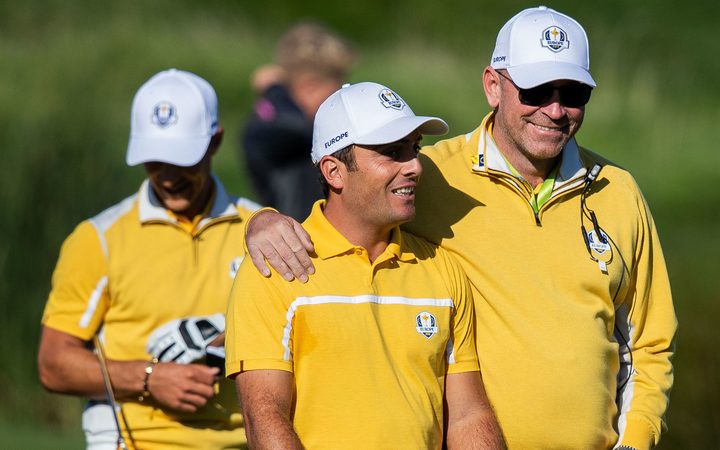 There was plenty of reason to smile for the European team after day one of the 2018 Ryder Cup. Photo: Photosport

It was the first time Europe had won all four foursomes matches - having suffered a 4-0 reverse in the format en route to defeat in Hazeltine two years ago - and their first sweep in either format since 1989.

But it was not just the points tally that will have sent European captain Thomas Bjorn off to dinner on a high, but the crushing nature of the victories as the home team dealt much better with the strong wind that developed through the afternoon as many of the big name Americans fell apart on Saturday (NZ time).

None of the foursomes matches reached the 17th green, with two finishing on the 14th, as the Europeans bounced back superbly to give their fans plenty to cheer after they had been quietened by the morning setback at Le Golf National near Paris.

Sergio Garcia and rookie Alex Noren led the way by annihilating Phil Mickelson and Bryson Dechambeau 5 and 4 in a battle between four men rested in the morning and it could have been even more emphatic as they led by seven after nine holes. Justin Rose and Henrik Stenson resumed their highly successful partnership to hammer Dustin Johnson and Rickie Fowler 3 and 2 having been 5-up after 11.

Ian Poulter and Rory McIlory, who was badly off form in the morning, came from 2-down to triumph 4 and 2 over Webb Simpson and Bubba Watson as Poulter was yet again inspired to new heights by the emotion of team competition.

"It was a tough morning for me this morning and I'm sure it was a tough afternoon for Jim (Furyk)," said Bjorn. "Those are the emotions you go through in a Ryder Cup.

"There was a pretty good feeling in the room over lunch, and I felt like a pretty good vibe considering that was a tough morning for us.

"We'll enjoy this afternoon for a few hours, but then we will focus on tomorrow."

Garcia fully justified his wild card selection but, playing his ninth Ryder Cup, the Spaniard too was careful not to get too carried away. "It's historic," he said.

"We swept the US and it hasn't happened before so it's obviously a great moment but it's just the first day."

McIlroy certainly enjoyed the afternoon more than the morning. "It was a bit of a last-minute pairing but Poults and I played well together at (previous Ryder Cups in) Medinah and at Gleneagles," he said.

"It was nice to get back out there with them and deliver another point for Europe."

Furyk looked shellshocked out on the course as he surveyed the giant scoreboards swathed in blue that denoted European leads and will have some hard thinking to do about his day two selections.

Mickelson, who has been through it all before during his remarkable run of 12 Ryder Cups, said: "We've got to come out and bring our best stuff. We know it's going to be a fight till the end, and we've got a lot of points left.

"We've only played eight points so far, and we just need to bring our best stuff and we will."

The US, seeking a first overseas win in 25 years, had the better of a topsy-turvy fourballs session, with Spieth particularly impressive when he and Thomas beat Paul Casey and Tyrrell Hatton 1-up.

World number one Johnson and Fowler won 4 and 2 against McIlroy and Thorbjorn Olesen while Tony Finau and Brooks Koepka came from 2-down to beat Rose and Jon Rahm on the 18th.

There was no fairytale comeback for Tiger Woods, however, as he and Patrick Reed lost 3 and 1 to Molinari and Fleetwood to take Woods' fourball record to nine defeats from 12 games.