David Fusitu'a's sporting gifts could have taken him to an All Blacks jersey says his school coach, who is utterly unsurprised at his heroics with the Warriors. 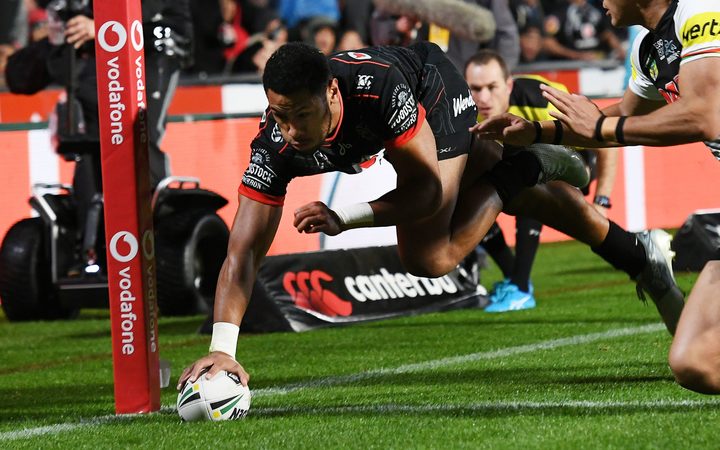 Warriors wing David Fusitu'a dives to score one of his trademark tries in the corner. Photo: Andrew Cornaga/Photosport

Former Kelston Boys' High School first XV mentor Athens Henare regards himself as fortunate to have overseen the only season of rugby union played by the former teenage prodigy.

It was rugby league until then, and straight into the Warriors junior programme afterwards.

The motivation was simply to have fun with his close friends after five years together at the west Auckland school.

Victory in the final of the national schools competition, when he scored a crucial try and set up another against Wesley College.

"Even in pre-season, you could tell he had all the attributes and not just the size and the speed," Henare said.

"David had a work ethic and he kept his emotions in check, no matter what. He had the attributes to go all the way in either code."

But family came first for the 17-year-old, whose father Edwin had raised him on rugby league and held a prominent post at Auckland's Marist Saints club, where Sonny Bill Williams was a junior.

In his junior Warriors years, fitness trainers would marvel at Fusitu'a's athletic measurements, most notably a phenomenal vertical leap which earned him early comparisons with Israel Folau.

Now into his fifth season of first grade, 24-year-old Fusitu'a has shone as the club booked a long-awaited finals berth.

His 22 tries - so often finished with a trademark one-handed dive in the corner - puts him one clear of Sharks fullback Valentine Holmes.

He is set to become the first Warrior to top the competition season try tally and he could surpass the club record 23 tries in a season set by Francis Meli 15 years ago.

A recent hat-trick against Saturday's opponents, Penrith, will give the Warriors cause of optimism.

However, Henare is sure the unfailingly polite former church youth group leader won't get ahead of himself.

"It won't matter for David, he's the same humble person he always was," he said.

"He's got everything going for him but plays for the right reasons, and it's not about himself."