Opinion - It only took 48 hours of the rugby season being officially open in Aotearoa for it to give us something to scratch our heads over. Even Ryan Crotty might be as well, given that it was his head that's at the centre of the mess. 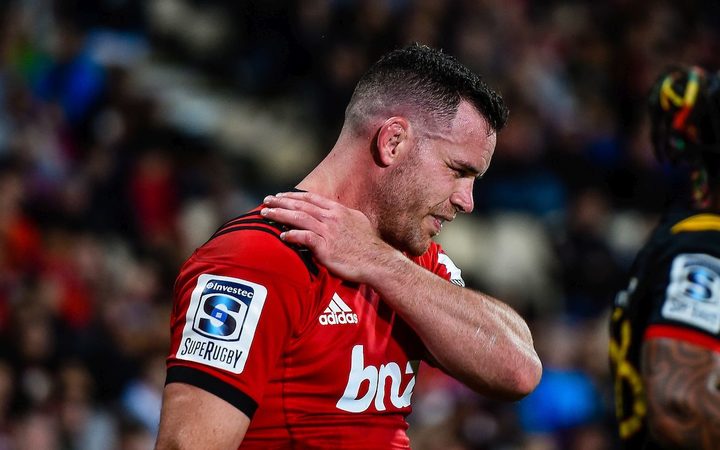 Ryan Crotty ran back into position after what looked like an incredible tackle by Lachlan Boshier, but the replays showed what was technically a head high tackle. Photo: Photosport

The other key component in the story is the arm of Lachlan Boshier, and the fact that the two collided in the 70th minute of the Crusaders' 45-23 win over the Chiefs in Christchurch last night. The All Black midfielder was looking certain to barge over to score a crucial try in the corner, when the highly rated loose forward stopped him in his tracks and forced him into touch.

At first glance, it simply looked like an incredible tackle. Boshier had come wheeling out of a ruck one metre out and had got his body underneath a diving Crotty, mustering all his strength and centre of gravity in a situation any defensive coach would be more than pleased with.

Crotty shrugged it off and ran back into position - after all, the Crusaders were still three points ahead at that stage and had the Chiefs pressed hard against their line. However, referee Ben O'Keeffe saw it fit to have another look at it.

The replays showed that in wrapping Crotty up, Boshier's arm had hit the shoulder and then rebounded onto the face of the ball carrier. So, technically, a head high tackle. Despite the fact that Crotty probably didn't even feel it, it warranted O'Keeffe to sin bin Boshier and award a penalty try.

Yes, the laws of the game have changed to make it safer for players. Boshier was unlucky, but it's wrong to blame O'Keeffe or the TMO for the decision. They were simply doing what they were told, and it's not the first instance of this situation happening - similar occurrences raised the hackles of Northern Hemisphere fans last season when the laws changed to crack down on high shots.

However, it was an incident that happened not long after Boshier's tackle that showed just how futile targeting head high tackles like Boshier's is. Chiefs replacement back Marty McKenzie, playing against his old team, attempted to run the ball back out of his 22 as they desperately tried to take the lead back in the dying stages of the game. Unfortunately for him, he ran straight into the knee of Seta Tamanivalu, knocking McKenzie out cold just moments after he'd got on the field.

It was a freak collision, Tamanivalu had simply got in a position to make an effective spot tackle and McKenzie's put his head in the wrong place. No action was taken by the ref, because there were no grounds to.

The outcome for both McKenzie and Crotty's tackles was probably the same - they wouldn't have remembered them. But, it would've been for wildly different reasons. Boshier's brush with Crotty wouldn't have even registered on a pro rugby pain scale, while Tamanivalu's hit would've had McKenzie struggling to recall where he even was.

The penalty try more or less sealed the game for the Crusaders, as it pushed them out to a two-score lead. The way the game was going, it's probable that they would've won anyway. But the two tackle incidents showed that in a game where players are running as fast as they can into one another, rugby has a long way to go to eliminate the risk of head injuries.