Irishman Conor McGregor will carry a considerable edge in weight and support into his crossover fight with Floyd Mayweather after weighing in two kilograms heavier to wild cheers in Las Vegas. 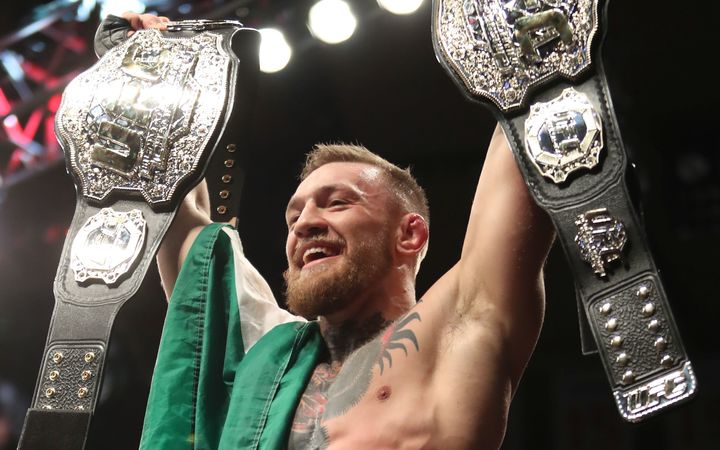 They might be the only advantages the mixed martial arts champion will have in his much anticipated clash against the undefeated Mayweather who tipped the scales at 68 kilograms, compared with McGregor's 70 kilograms.

The weigh-in in front of nearly 7,000 raucous fight fans at T-Mobile Arena kicked off the party ahead of Saturday's fight as high rollers, sport and entertainment celebrities flood into 'Sin City' for what is being billed as the richest fight of all-time.

After months of hype and profanity, the two fighters appeared on stage together one last time before stepping into the ring and took a few final jabs at one another.

McGregor, who will be making his professional boxing debut, appeared out of the tunnel wrapped in an Irish flag, an Irish ballad playing as he slowly made his way to the stage.

Mayweather followed to Phil Collins's "In the Air Tonight" wearing a white baseball cap with TBE (The Best Ever) boldly stitched across the front.

The 40-year-old American stepped onto the scales in green socks and green underwear with Paddy Power across the waist, perhaps one final taunt at McGregor and his legion of fans.

So sure is Irish bookmaker Paddy Power of the outcome of Saturday's fight that they have already paid out on a Mayweather victory.

McGregor, of course, would not let the weigh-in end without taking a shot at his opponent. "That's the worst shape I've ever seen him in," bellowed McGregor. "I'm a professional, I make weight, that's dedication, that's focus.

"I'll be a lot bigger than him tomorrow."

Mayweather was unflustered by McGregor or the jeers raining down on him from a beer and testosterone fuelled crowd of mostly UFC fans.

"I've been here before, I know what it takes to win a fight of this magnitude," Mayweather said. "Weight doesn't win fights, fighting wins fights."