The Australian Jillaroos have avenged last year's Test loss to the New Zealand Kiwi Ferns with a gritty 16-4 win in Canberra. 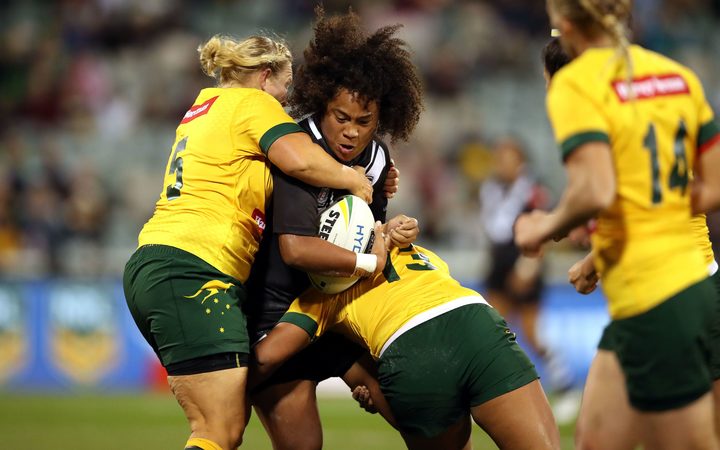 The Jillaroos continued their dominance of the Ferns from the Auckland Nines whitewash earlier in the year and turned the tables on last year's 26-16 loss by winning a bruising curtain-raiser to Friday's Anzac Test.

Ferns skipper and star fullback Sarina Fiso was well below her best in the first half, with her game blighted by crucial handling errors.

She dropped an easy ball deep in defence, allowing the Jillaroos to build pressure and forcing a clearing kick which was pounced on by Australia fullback Isabelle Kelly.

Kelly, who was on debut after Sam Bremner withdrew late with injury, burst through the defensive line to score a superb try under the posts.

The Ferns hit back when Atawhai Tupaea crashed over in the 25th minute but it didn't take long for the Jillaroos to regain control.

Fiso bungled a high ball allowing Jillaroos five-eighth Zahara Temara to swoop and score under the posts just before the half-hour mark.

Caitlin Moran added the two points to give the Jillaroos as 12-4 lead which they took to the break.

Jillaroos forward Renae Kunst's hard-running was rewarded 11 minutes into the second half as they forced her way over the line to extend the lead to the eventual winning margin.

Australia were strong in defence, repelling the Ferns in a dour second half as the crowd built steadily ahead of the men's Test.

Jillaroos skipper Ruan Sims was named best afield after leading her side's pack through the middle in a tough encounter.