The All Blacks have broken the record for successive victories by a top-tier rugby nation after beating Australia 37-10 at Auckland's Eden Park. 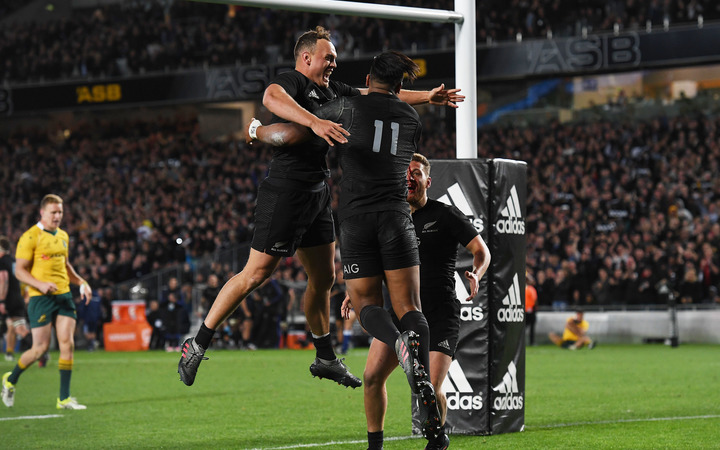 The All Blacks have set a new record for most consecutive test wins by a top-tier nation. Photo: PHOTOSPORT

New Zealand have now won 18 games in a row, stretching back to last year's Rugby Championship.

The match was a much closer affair than the final score would suggest, with Australia dominating a number of statistics including possession.

Look back at RNZ's live blog of the match

The visitors were given the opportunity to open the scoring when the All Blacks were penalised for being offside from 30m out, but Bernard Foley - in front - was unable to convert the three points.

Moments later, a break from New Zealand centre Anton Lienert-Brown from within the home team's half set up a try to Israel Dagg.

Lienert-Brown then scored his own try in the 10th minute after breaking the Wallabies' defensive line inside the visitors' 22.

Australia had the majority of the possession in the first 30 minutes of the match but were unable to break into the All Blacks' 22 until the 27th minute, when lock Rory Arnold scrambled his way to the line.

The Wallabies were granted a penalty kick on the restart after All Blacks captain Kieran Read started a scuffle following the try.

Foley was able to convert the two points but number 12 Reece Hodge missed the penalty on halfway, which would have levelled the match 10-all.

It didn't take long for the All Blacks to strike back. After keeping the Wallabies in their own 22 for a couple of minutes, TJ Perenara charged down a kick off the back of Australia's scrum and managed to gather it again before dotting down the All Blacks' third try of the night. 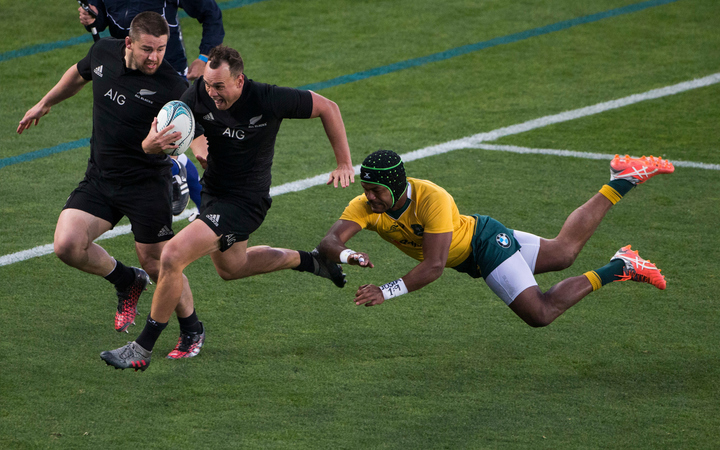 New Zealand's Israel Dagg breaks a tackle on his way to score his try. Photo: PHOTOSPORT

Perenara's try was the closest of the All Blacks tries to the goal posts, just 10m outside, but Beauden Barrett was unable to convert it, leaving the score 15-7 at half-time.

Australia managed to open the scoring in the second half - with Foley kicking three points right out in front after the All Blacks were penalised for not rolling away.

Beauden Barrett was pulled from the field early into the second half, replaced by Aaron Cruden, after struggling with the boot all night.

Just minutes later, it appeared the Wallabies had equalised, when Henry Speight scored in the right-hand corner off his team's own break - but the try was disallowed, with Dane Haylett-Petty ruled to have obstructed Julian Savea during the chase.

To add insult to injury, it was Savea who scored the next try for the All Blacks. He collected a grubber from fullback Ben Smith, following a break in play from within the home team's half.

TRY! That is vintage Julian Savea! He storms down the sideline and bumps off two defenders to score! #NZL 30 #AUS 10.#NZLvAUS pic.twitter.com/zAEdTEBqGt

With 20 minutes left, the All Blacks emptied their reserves bench, which once again proved to be the game-changer.

Australia's Israel Folou was penalised for being offside, and Cruden put the All Blacks 15 points in front with 15 minutes left on the clock.

With 10 minutes left, Savea scored his second try of the night by running through two Australian defenders down the sideline.

He set up a try just two minutes later, after he was dragged one metre short of the line, only to offload it to Dane Coles, who dotted down in the left-hand corner.

Australia dominated the majority of the statistics for most of the match but handling errors, and the rub of the green, weren't going their way. That was further evidenced when they fumbled the ball just six metres short of the try line with no one in front of them.

Six wins until we draw equal with Cyprus's rugby record of 24 wins on the trot.

The All Blacks win also extends their unbeaten run against Australia at Eden Park to 30 years.