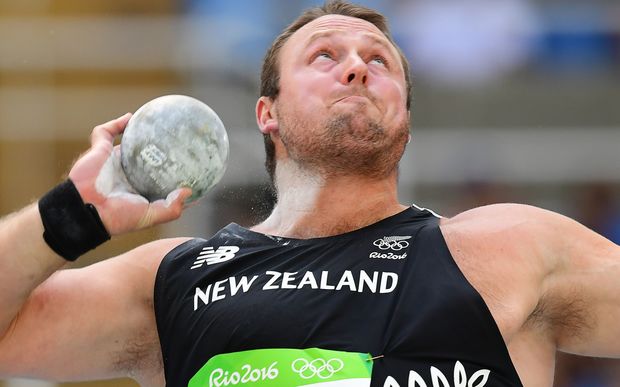 Tom Walsh in the men's shot put qualifying round in Rio. Photo: AFP

Walsh, the world indoor champion, threw 21.36m on his second to last attempt to make it into the top three.

American Ryan Crouser broke the Olympic record with a throw of 22.52m to win the gold medal from his compatriot Joe Kovacs, who threw 21.78m.

The other New Zealander competitor, Jacko Gill, finished in ninth place with a best throw of 20.50m.

Walsh said it was "pretty cool" to win a medal.

"I'd have loved gold but it's bloody bronze. In a good way.

"It was awesome to be out there and to have a Brazilian in the field and the crowd going nuts; it was an awesome atmosphere. I threw pretty well, probably not as well as I thought I could, but it was still well enough to get third place."

Students and staff from Walsh's old high school in Timaru erupted in cheers when he claimed bronze.

Nick McIver, the rector of Timaru Boy's High School, where Walsh graduated from in 2009, said pupils and teachers were nervously watching in classrooms and corridors as the action unfolded this afternoon.

"Absolute edge of the seat stuff. The boys were obviously hanging on every throw, like I think the whole nation were at that moment, and just delighted that he came through with a medal, and looking forward to seeing him in action in the future."