Rio 2016 Olympics - New Zealand women's 470 sailors Jo Aleh and Polly Powrie have had another setback in their bid for back to back Olympic Golds. 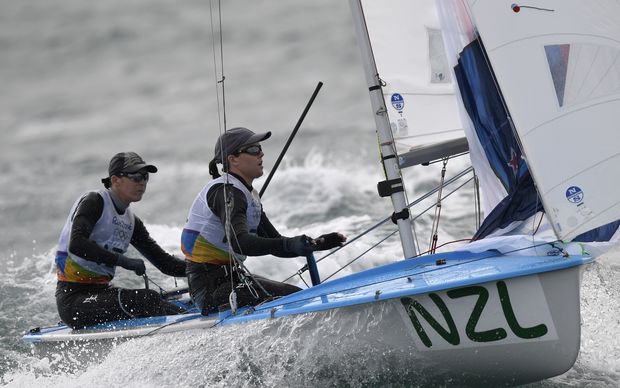 After crossing the line in first position in race 6 on the water, they have earned a UFD disqualification after it was ruled they were too early at the start.

Aleh and Powrie received a late disqualification on their first day of racing over a port starboard (right of way) incident which occurred soon after the start of the race, scratching that result from the books.

That saw them fall from second to 10th overall after the opening day in the 470 event.

They climbed back to 6th overall before today's racing and with the help of a 3rd place finish in today's second race, have only dropped one spot to seventh.

Today's third race in the men's and women's 470 was postponed.

Daniel Willcox and Paul Snow-Hansen improved their standing to 9th overall after a 5th and second finish today.

Meanwhile, Josh Junior has jumped from 14th to 8th overall in the Finn class, with just the medal race to come.

He finished 4th and 6th in his two races today.

In the Nacra 17 class Gemma Jones and Jason Saunders have dropped on spot to sit 5th overall with just the medal race to come.

They had two 13th place finishes before a 2nd in their final race today at the Marina da Glo´ria.

In the track cycling Natasha Hansen qualified for the 1/8 finals of the Women's Individual Sprint with a time of 11:40.

Dylan Kennett is 10th overall in the men's omnium after three disciplines, with three events to go.

Elsewhere, New Zealand weightlifter Tracey Lambrechs has come fifth in the Snatch, and Clean and Jerk in the women's +75kg division.

She achieved a combined weight of 231kg in her group.

"It was quite an experience, I'm slightly disapointed in my snatch lifts but I put it all out there & loved every minute of it," said Lambrechs.