Opinion - This week was set up to be one of the great ones in New Zealand rugby, but the Olympic men's sevens team were set up to fail by a governing body that couldn't get its head around a national team that - just for one season - should have been more important than the All Blacks. 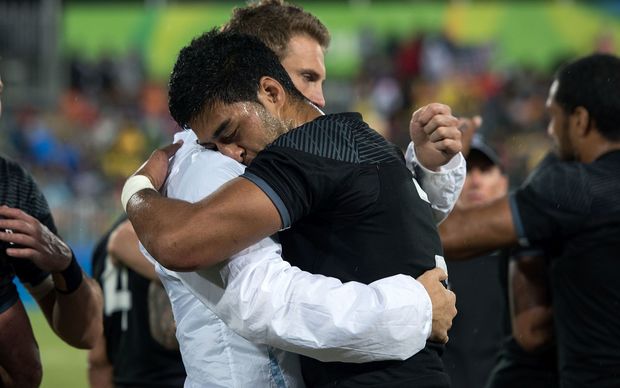 New Zealand captain Scott Curry, left, gets a hug from teammate Akira Ioane after their quarter final loss to Fiji in the men's rugby sevens at the Rio Olympics. Photo: PhotoSport

A gold medal at the Olympics would've easily been our greatest accomplishment in the abbreviated version of the game. Instead, it'll remain the team's Commonwealth Games gold and the memorable 1996 Hong Kong Sevens triumph.

There are some parallels to this year's sevens side and that '96 one. Jonah Lomu and Sonny Bill Williams played the roles of the superstars, while Christian Cullen and the Ioane brothers were/are the rising talent. The coach of both is Sir Gordon Tietjens, who has been at the helm of the sevens side for the last 22 years.

However, the rest of the '96 team were handy provincial players and fringe All Blacks (Super Rugby was in its inaugural season) - while today's side are a bunch of mostly young players who haven't been able to crack it in the top New Zealand level at XVs.

Why the powers-that-be decided that a group of guys who (mostly) fall outside the top 200 professionally contracted players in the country could simply win a gold medal is ludicrous.

Of course, if you've actually watched sevens in the last couple of years, today's results wouldn't be any shock at all. New Zealand haven't won the last two titles of a World Series that we've dominated since its inception. The last season really gave some clues of the impending doom facing the men's team, with four quarter-final exits and the ignominy of losing to the United States three times in a week.

Contrast that to Fiji. Their run at the Olympics has been timed to perfection, with a new coach who has been allowed to centralise his squad and given free reign to pick whichever player he wants. Ben Ryan was even able to toy with the idea of including walking headline generator Jarryd Hayne in his squad (admittedly only for about five minutes).

Maybe Titch has been in the job so long he thought he could mould this youthful team into world dominators, like he has done consistently for the last three decades. But this isn't the World Series, it's the Olympics. Every precaution should have been taken by New Zealand Rugby to ensure success, instead of rumours that top All Blacks were warned off from committing to sevens as it would jeopardise their selection for the Lions series next year.

That's right, next year. The All Blacks programme this year is the same old Rugby Championship against a rebuilding Springbok team and a Wallabies side that couldn't win a raffle if they bought all the tickets.

Surely some more decent players could have been convinced if New Zealand Rugby showed a little more enthusiasm, rather than slavishly guarding their AIG and Adidas-funded cash cow (two companies that get exactly zero exposure through the sevens team at the Olympics).

Instead, we got one of the most embarrassing 24 hours in New Zealand rugby. Losses to Japan, Great Britain and finally Fiji meant New Zealand were not even good enough for a men's medal, in the one sport you'd think they would dominate.

Thank goodness for the women's team. Faced with a raft of challenges that are far more institutionally arrogant (lower wages being the most obvious example) than simply sending an understrength team, their valiant silver medal looks like one hell of an achievement right now.

*Jamie Wall grew up in Wellington and enjoyed a stunningly mediocre rugby career in which the sole highlight was a seat on the bench for his club's premier side. He's enjoyed far more success spouting his viewpoints on the game to anyone who'll care to listen.