Rio 2016 Olympics - The New Zealand men's sevens team has been beaten by Fiji 12-7 in the quarter-finals. 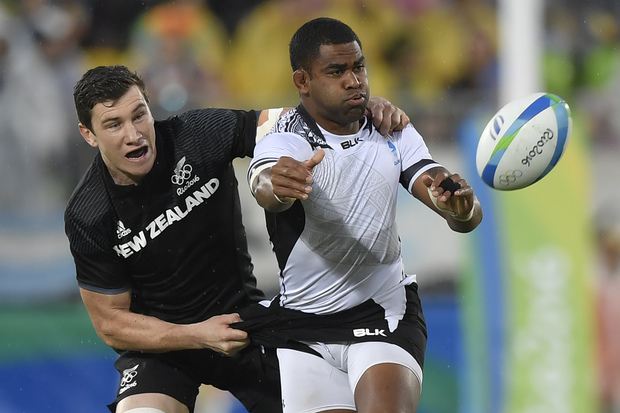 Fiji scored first but New Zealand led 7-5 at half-time on the back of a Gillies Kaka try, despite playing with six men for the latter stages of the first half after Rieko Ioane was sinbinned for a dangerous tackle.

Fiji hit back shortly after the half-time break to take a 12-7 lead and managed to hold onto their advantage in a frantic final few minutes.

New Zealand had a chance to win the match with the final play of the game, but coughed up possession by giving away a penalty which Fiji duly kicked out to seal their place in the semi-finals.

Coach Sir Gordon Tietjens said being eliminated from the Olympics was a bitter pill to swallow.

"Certainly sad to be put out of the tournament - the most important tournament for us for four years, going to the Olympics for the first time ever - it's devastating.

"I feel for the players but it wasn't to be. We just weren't good enough."

The side had scraped into the quarter-finals after losing two of their three group games.

Their play-off chances appeared to be all but gone after a 21-19 loss to Great Britain this morning, needing other results to go their way to get in as one of the best third-placed teams.

That happened when Fiji beat the USA 24-19, meaning both New Zealand and the USA finished on 5 competition points with New Zealand having a two point superior points differential.

Fiji will take on Japan in the semi-finals, while Great Britain faces South Africa.

Look at how the match unfolded here: