Top seeds Fiji beat the United States 24-19 to send the Americans home early and save New Zealand the embarrassment of a pool stage exit at the inaugural Olympic sevens tournament.

Danny Barrett scored the opening try for the USA midway through the first half.

Fiji skipper Osea Kolinsau struck back a minute before the break to make it 7-7 but was then yellow carded before Vatemo Ravouvou crossed to put Fiji in from 12-7 at halftime. 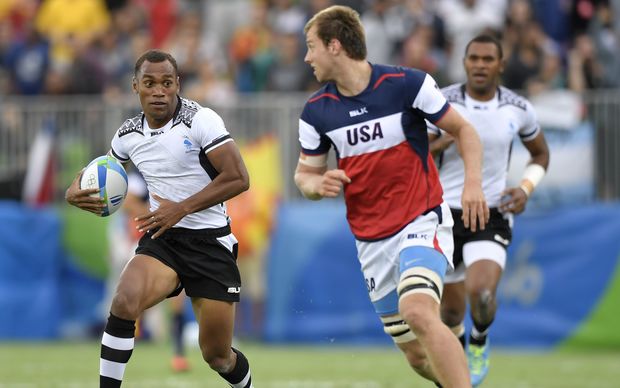 Osea Kolinisau scored a try and received a yellow card in Fiji's win over the USA. Photo: AFP

Speedster Perry Baker equalised for the Americans with Kolinisau still off the pitch with Madison Hughes adding the extras to put the USA 14-12 up in the first minute of the second half.

But with their full compliment restored, Viliame Mata scored to put the World Series champions back in the lead and Semi Kunatani crossed two minutes later to seal an unbeaten run in pool play.

Nate Ebner scored a 40-metre try in the final minute to get within five points of the top seeds but his skipper Madison Hughes was unable to convert and the Americans, champions at the last Olympic rugby tournament in 1924, were out. 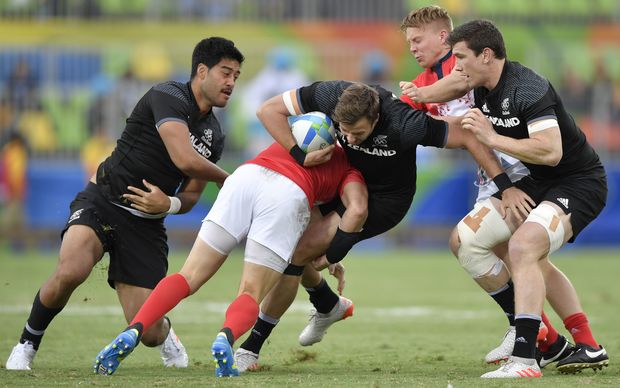 New Zealand had earlier suffered a 21-19 loss to Great Britain in their final pool match which, coming after their stunning 14-12 defeat to Japan on day one, left the All Blacks sevens relying on Fiji to beat the Americans by more than four points to reach the quarter-finals as one of the best third placed teams.

So New Zealand and Fijians will meet in the first quarter-final at the Deodoro Stadium, before Japan take on France, Great Britain face Argentina and South Africa play Australia